What's on your mind?

With Dreamworks' Bad Guys movie being one day away, I feel like I should point out the elephant in the room: I know I said it before, and I'll say it again. The Bad Guys movie is probably the closest thing we'll ever get to a Sly Cooper movie. 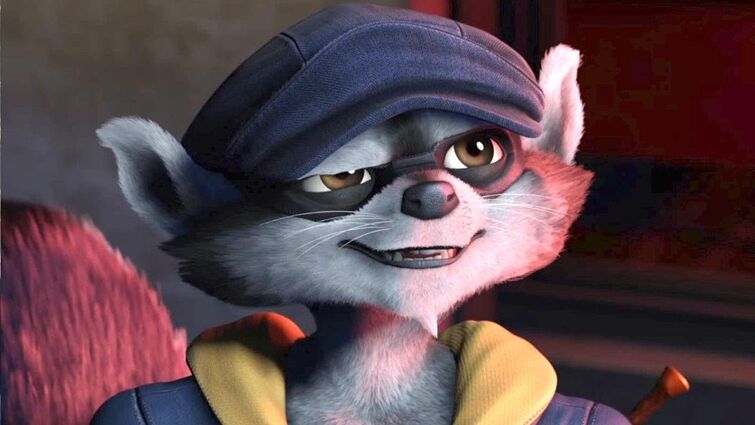 We all know about the Sly Cooper Movie that could-- no, SHOULD have been made that was unfortunately cancelled. Ever since I heard of its cancellation, I grew fascinated by Sly Cooper even through I never had any Playstation system growing up. And when I saw the trailers for the new Bad Guys Movie, I couldn't help but think there's a few similarities between the Bad Guys and the Cooper Gang. 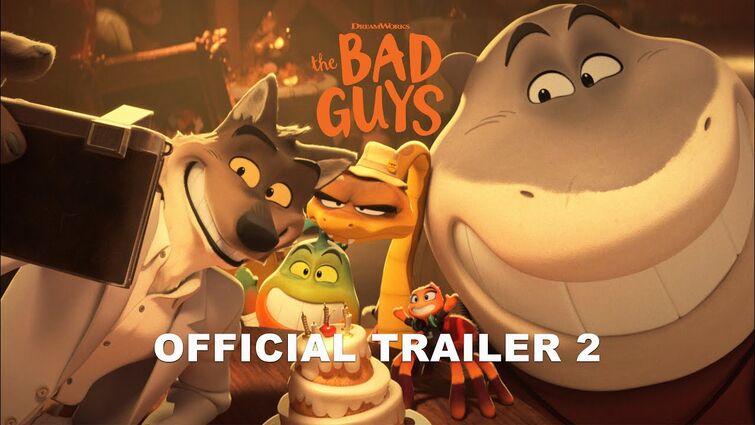 For those who've been heartbroken by the cancellation of the Sly Cooper Movie, I hope the movie premiering tomorrow will act as a close second to what should have been. And who knows? Maybe Bad Guys could be a big wakeup call to Sony to continue the Sly Cooper franchise. Honestly, I don't know, but I sure hope that's the truth. 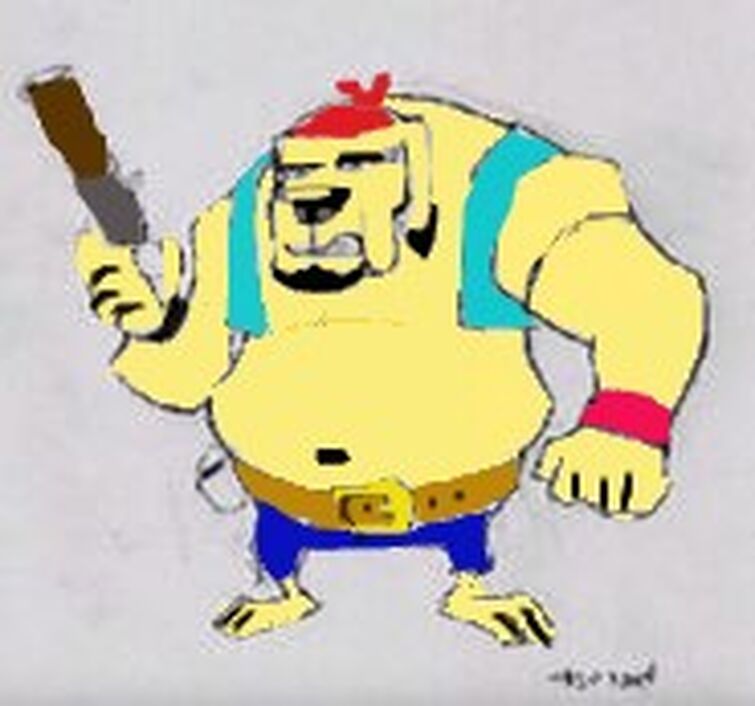 I like this character. I wish I had his model from the game

Lately, I've been doing Treasure X. As I was unearthing my new minifigure, an idea suddenly came to my head: Why can't there be a Treasure X Sly Cooper edition? I can greatly imagine breaking into a set with a special tool and revealing a minifigure of Sly, Bentley, Murray, Carmelita, Sly's ancestors, or some other character, along with one of various treasures (especially a chance to find a rare gold-dipped treasure). I gotta say, I think it's a good idea, but honestly, I'd like see your opinions and maybe some suggestions on what the characters and treasures would be. 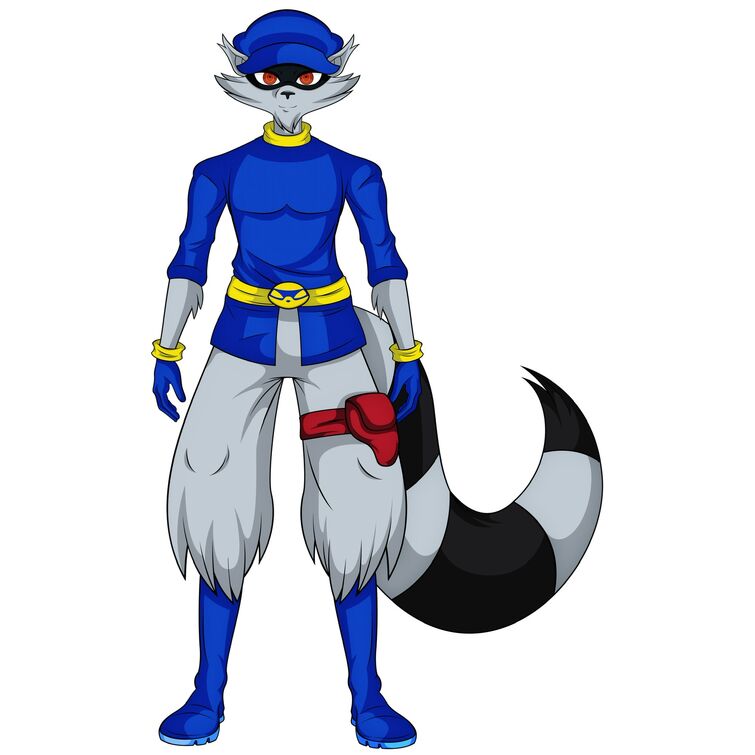 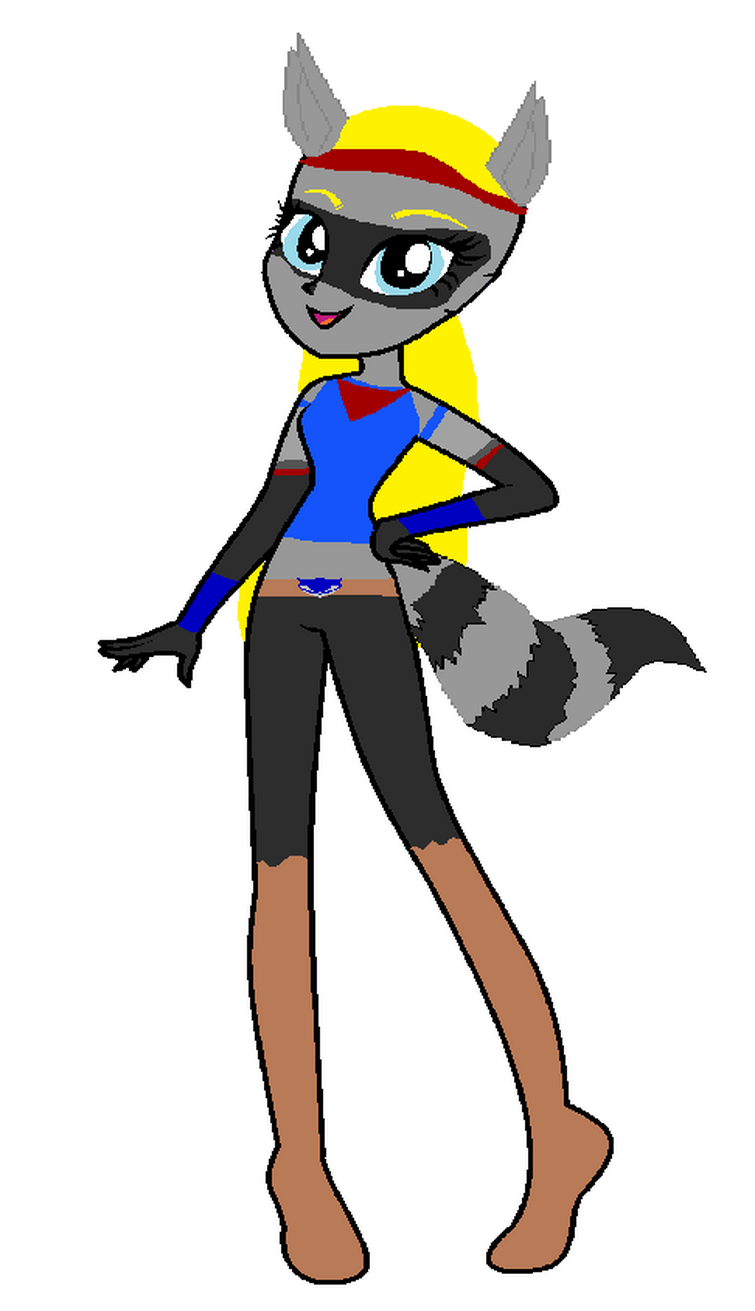 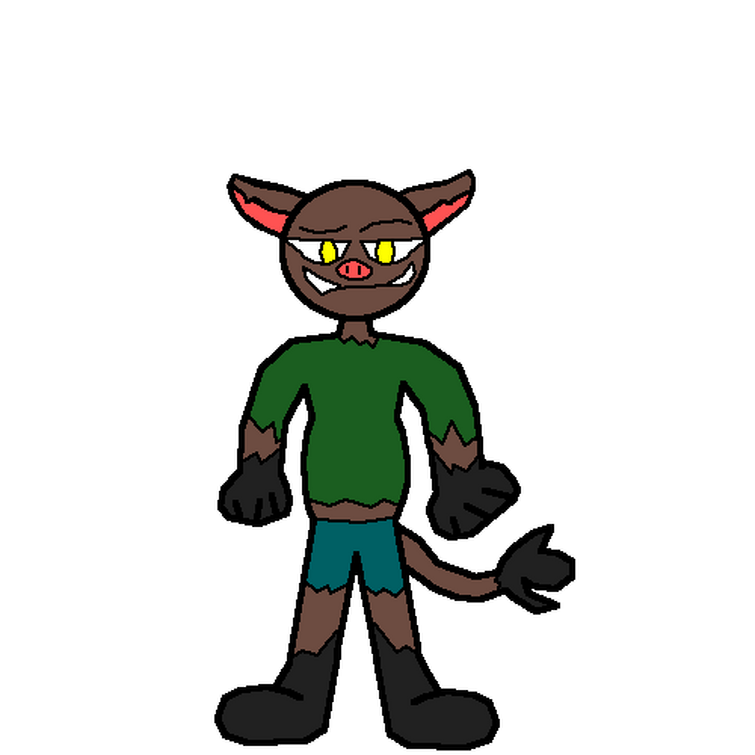 This is Ol' Tusks the Wild Boar. He's a bit of a hotheaded dimwit, and doesn't think about his actions for long, he just does them anyway.

Bio: he's tasked with Protecting Hog Forest from Kev's quest; however, he fails when the Raccoon jumps on his back, and rides him through the Swamp, and into a large Willow, killing Ol' Tusks. He also used to be Chief of Construction, and was the creator and owner of the Warthog Steel Industries; however, these were each blown sky-high by Kev and Lyman the Lemur, before they fought Ol' Tusks. 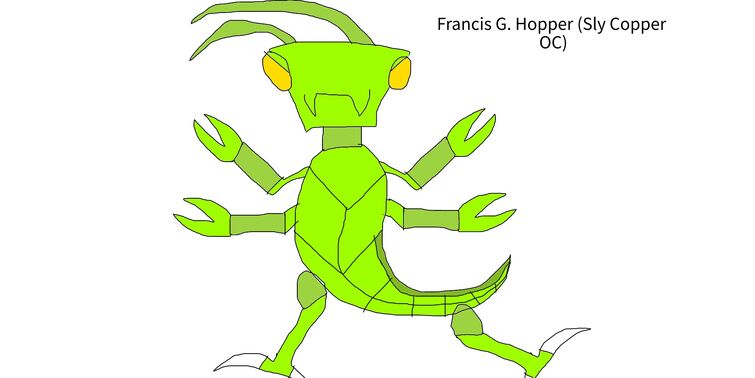 Francis G. Hopper is a grasshopper who was a former gym coach that got fired from his job due to his training methods being dangerous and got a job working for Baron Goliath as his back-up guard. he can jump indefinitely and repeatedly when in midair without the aid of a physical surface as well as being a good kickboxer. 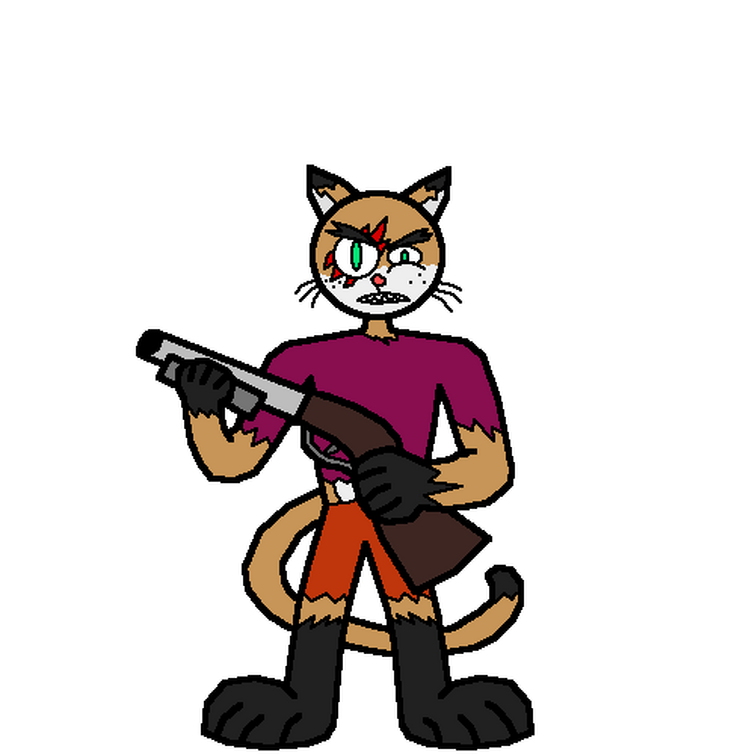 This is Cranky Creek the Cougar, he's not really crazy; but his boss fight is, since he goes cuckoo-Crazy with that Shotgun in his hands; he works with Dr. Lexus Vesuvius, and he does survive his encounter with Kev Cooper, however, he is sent to the hospital to regain his strength before they whisk him off to Prison.

BIo: Cranky Creek used to just be called "Creek the Cougar" until people started to notice how violent he got around Raccoons; he also wasn't Crazy, until a member of the Cooper Clan was chasing after one of his kids, who had decided to run through the Marsh to not do the dishes and scrub the Canoe down; and ran right over his tomato plants, crushing them all. infuriated at the destruction of his tomato plants, he grabbed his trusty Double barrel shotgun, which he happened to name; "Esmeralda"; and then he shot the unknown Cooper dead, right through the chest. He then proceeded to chase the unknown Cooper child off his property, almost blasting the little raccoon's tail off. Fast forward to 15 years later, Kev's all grown up, and ready to fight Cranky Creek, so he went into the marsh and found his shack, and then proceeded to chuck stones at the side of the building, until Cranky Creek grabbed "Esmeralda", kicked the door to his shack open, and started shooting at Kev. Lyman notices a bunch of mirrors all throughout the Junkyard that was owned by Cranky Creek, and tells Kev to trick Creek to shoot the mirrors with his Shotgun. Kev listens to him, and tricks Cranky Creek to shoot the mirror, which flings the pellets back at him, hitting Cranky Creek in the leg, damaging him a bit, and the process is repeated, as Creek shoots himself in the rear on accident, almost blowing his tail clean off, and the third time has him getting hit in the stomach, as he stumbles and falls down, dropping the Tags of Ownership, while saying that Kev won fair and square; but he'll be up against much, much worse. And then Delilah Dingo arrives, and takes Creek to the hospital. 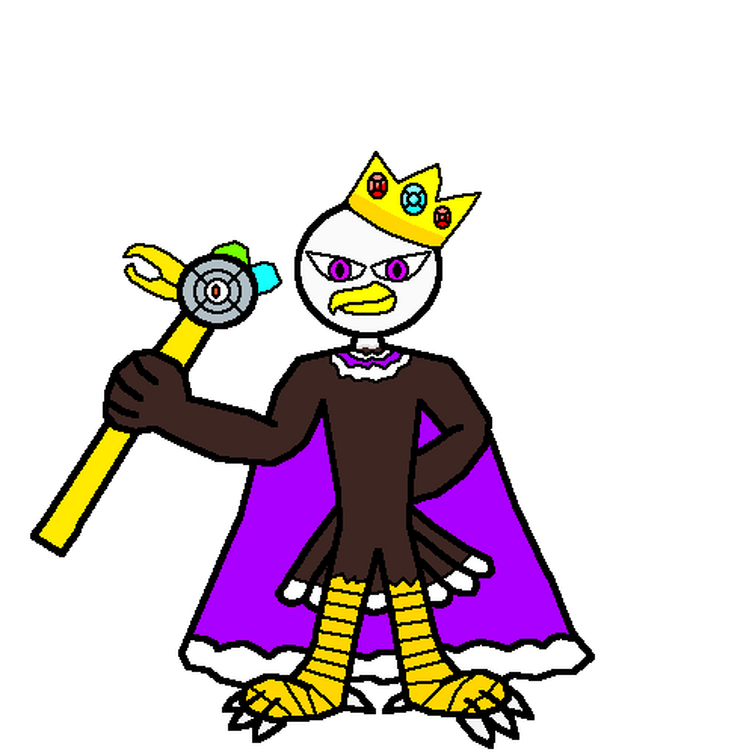 This is Sir Ernest, a tyrannical eagle with intentions of ruling over the Goldengrass Marshes with an iron claw, who's a part of Dr. Lexus Vesuvius's crew.

Bio: After having a long talk to Snake-Eyes the Burmese Python, Dr. Lexus Vesuvius was getting angry; and so asked Sir Ernest to guard the Core of the Marsh, as well as Osprey Bayou; with his life. Sir Ernest told him he would not let him down; and so Kev has to climb a large Swamp Oak, to reach Sir Ernest's Court; where the two fight in the branches and boughs of the Swamp Oak; before Kev slaps Sir Ernest against the back of the head with his Hook, which he managed to grab the Ownership tags of both the Marshes' Core, and Osprey Bayou; before Sir Ernest fell into the murky water below, and was ambushed and killed by a Saltwater Croc. well; he did say he'd guard Osprey Bayou and the Marshes' Core with his life, which he did.

I mean Sly has one, Bentley has one. Well, Sly technically has two but, still. No love for "The Murray"? 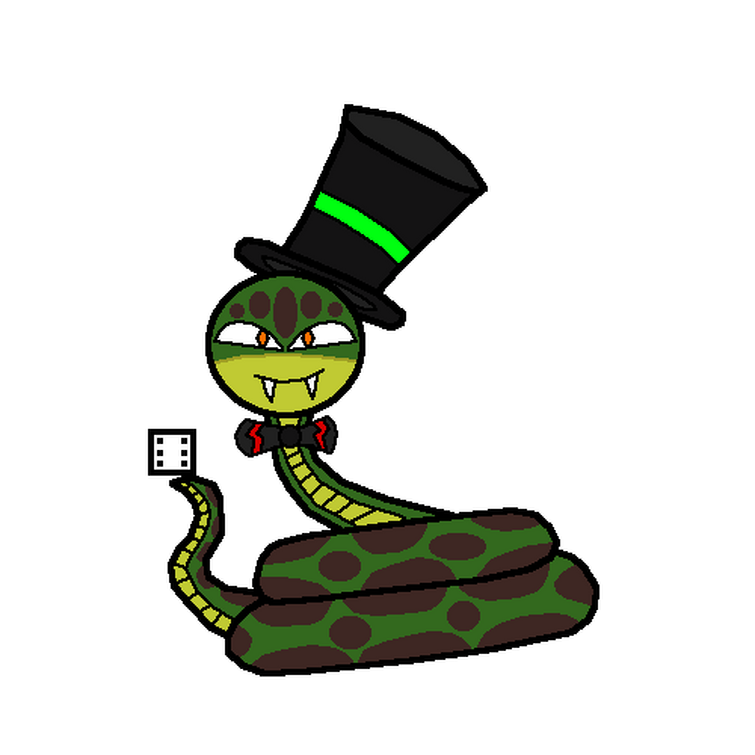 Bio: Dr. Lexus is reading the Swamp Gazette while having a bagel at 9:00 in the Morning, as he comes across the article of his second Henchman; Wallace the Wallaroo; getting his block knocked off, and having his crown of the Boxing Emperor snatched from him by a certain orange Bandicoot; he sprayed coffee everywhere and demanded of his henchmen and Creations to do the job correctly, kill Kev, and not wind up eaten alive like Al, or Knocked out, like Wallace. it was then that Snake-Eyes, his Burmese Python butler; asked Lexus if he could help dispose of the pest, and destroy the Swamp. out of ideas, Lexus said yes, and sent Snake-Eyes into Anaconda Swamp, where Snake-Eyes proceeded to build several massive, sprawling Casinos in the Wetlands; but, it seems the beast that was destroying Wallace's Taverns had laid its eyes on the Casinos, as they too started exploding every 2 weeks after one was built. Snake-Eyes then waited for the right moment, and found out that it was Kev and Lyman the Lemur, back at their old explosive tricks yet again, and thus started chasing Kev; as Lyman the Lemur detonated the Explosives, causing Snake-Eyes biggest Casino ever built, which was named Python Plaza; to become fatally unstable, and the Chase went through the entire Casino, as Snake-Eyes finally managed to GRAB Kev, and was ready to strangle him to death, but Lyman the Lemur came just in time, grabbing Snake-Eyes by the tail, and throwing him off the roof, into the mud below. After some; "Convincing"; Snake-Eyes finally caved, and gave the Tags of Ownership for Anaconda Swamp and Thistleberry River back to Kev. Like Wallace the Wallaroo, Snake-Eyes survived the Ordeal, but had cast $200 Million dollars out the window with the Casinos, and Dr. Lexus was going to have a really long talk with Snake-Eyes later that month... 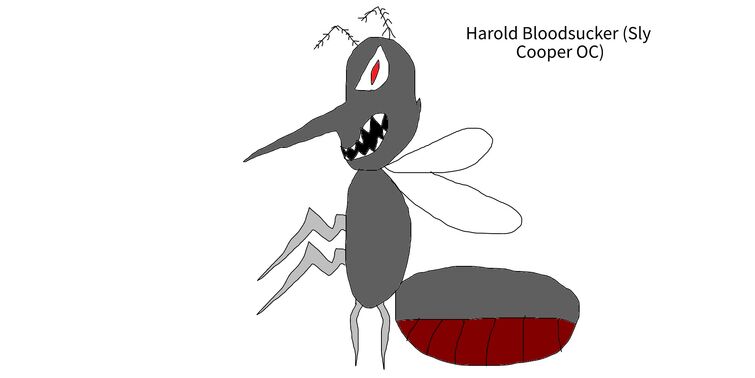 Harold Bloodsucker is a mischievous mosquito who works for Baron Goliath as his Eyes and Ears and was quite a pest towards the Cooper Gang. being a mosquito, he able to absorb blood, while removing it from the source, into their body and use it in various ways, gaining some form of advantage, either by enhancing themselves, gaining the drained power, using it as power source etc., either temporarily or permanently. Depending how this power is used, it can be excruciatingly painful or even lethal. 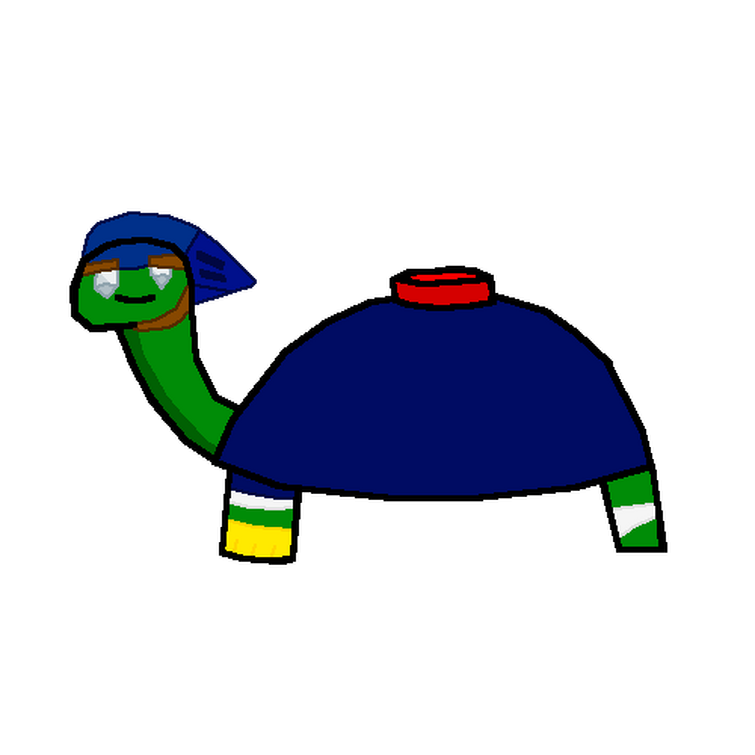 It's Bentley the Mine Turtle- XD 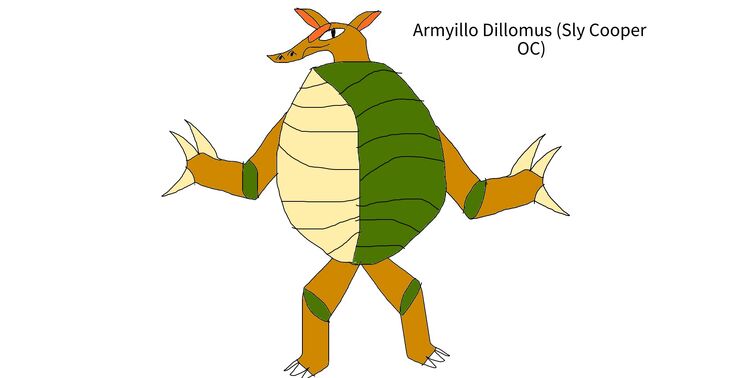 Armyillo Dillomus is hardened armadillo Infantry soldier with a no-sissy attitude and a love of battle and shooting things with his new hidden shell-cannons. he is currently working for Baron Goliath after he offered him a deal in destroy the Cooper Gang once and for all. he can use rolling and tucking into a ball for combat in various ways to attack or defend himself from dangerous hazards. 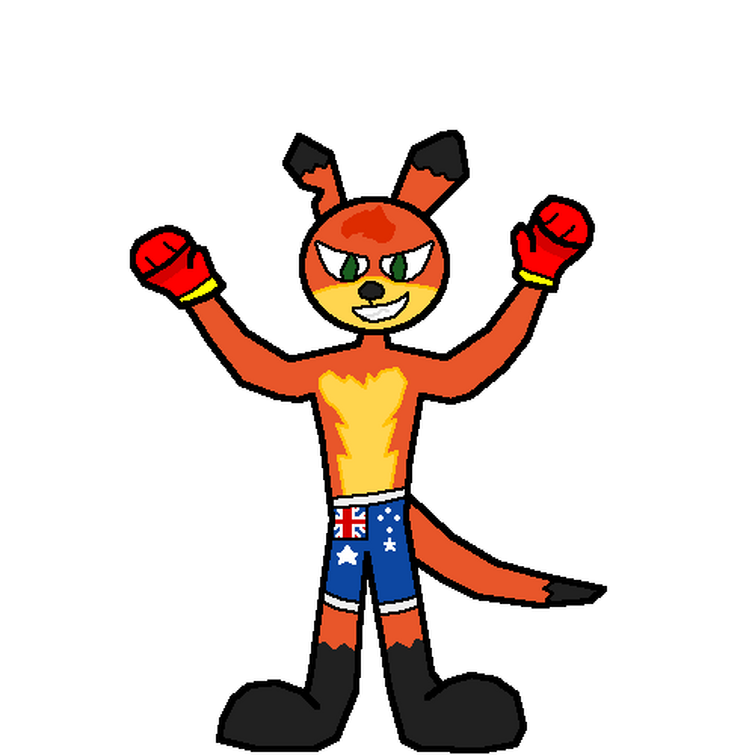 This guy belongs to Me, btw.

Bio: After Dr. Lexus Vesuvius learned about what Kev Cooper, Wasabi Whipshot and Lyman the Lemur did to Al; he tasked Wallace with protecting the Eastern Marshes, along with Bandicoot Billabong; from Kev. Wallace starts establishing Taverns, Bars, and Sports clubs; but 2 weeks later they keep "Mysteriously" getting blown to pieces. After some time though, he finds out that Kev, along with Lyman the Lemur; are the main reasons his stuff's getting blown sky-high; so he challenges Kev to fight him in a Boxing ring. Kev wins the battle by Uppercutting Wallace in the jaw, rendering him dazed and confused, as Wallace falls out of the ring and onto the floor, as the Tags of Ownership for the Eastern Marshes and the Bandicoot Billabong fall from his left Boxing glove. Wallace is last seen crying on the floor, as Kev walks out of the Tavern; and to add insult to Injury, he loses his title of All-Time Boxing Emperor to, Crash Bandicoot two weeks after he lost the match against Kev Cooper.