The Archer Costume was one of the costumes available for Sly Cooper to use in Sly Cooper: Thieves in Time, acquired in Medieval England. It was created by Bentley when he sent Sly out to gather materials for the costume, such as metal, wood and leather.[1] After obtaining the costume,[notes 1] Sly made use of the new abilities granted to rescue Sir Galleth Cooper from the circus[2] and to fight the Black Knight.

Some say this outfit was tailored by a genius, but whatever the case, it certainly spawned a fashion trend in Merry Olde England. Combining stylish good looks with rugged durability, it allows the wearer to fire arrows with attached ropes, creating tightrope pathways.
― In-game description[src]

The Archer Costume, while worn, would dress Sly in a similar appearance to Robin Hood. He wears a brown bycocket adorned with a red feather on his head. A green tunic with a brown mantle is worn, along with brown leather gloves, a belt and brown boots. A quiver is worn on his back,[notes 2] and Sly's cane is replaced with a bow with a crook on one end.

Possessing the least amount of functions out of Sly's costumes, the Archer Costume has no other function than firing arrows from buckets. Not only does the costume disable Sly's use of any ThiefNet gadgets, such as the use of the paraglider, he is also unable to perform some of his default moves such as the Spin Attack or Stealth Slam. Despite his bow having a hooked end on one side, Sly is unable to swing from hooks or attach to wall hooks.[notes 4]

Sly aiming at a target while wearing the costume 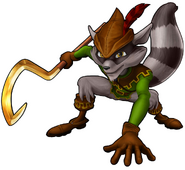 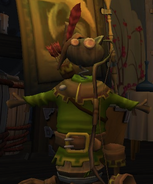 The costume on display inside one of the gang's hideouts

One of Sly's idle animations while wearing this costume has him playing his bow similarly to a guitar.

Bug: If Sly enters the secret room in the Arabian city (called the Lazy Trunk Spa & Lounge on the map) while wearing the Archer Costume, a glitch will occur due to the area not allowing Sly to switch into any costume other than the Thief Costume. Returning to the safe house via the pause menu will fix this.