Immortality! Immortality is what I seek! The other Klaww Gang members were much too short sighted, they were satisfied using the Clockwerk Parts to drive their various trivial schemes. But not me, no, I saw them for what they really were – the keys to life eternal!
― Arpeggio[src]

Arpeggio was the chief inventor and leader of the Klaww Gang, as well as the mastermind behind the events of Sly 2: Band of Thieves. He was a small British parrot who desired to wield the power and immortality of Clockwerk, Sly Cooper's nemesis. To this end, he manipulated the Cooper Gang into stealing the Clockwerk parts from his fellow Klaww Gang members for him, with the help of his protégée and assistant, Neyla.

He was voiced by Sam A. Mowry.

Arpeggio attended a prestigious boarding school, so his background life and information on his parents are a mystery. He was at the top of his class intellectually, but due to his tiny wings, he was unable to fly, and fell behind the other kids in physical standards. Furious at his feeble body, he focused his powerful mind to find a cure. His studies led him to the arts of the Italian Renaissance Masters, whose notes and machinery designs served as a spring board for the sinister young genius.

Eventually, Arpeggio constructed a large blimp, which served as his home and base of operations. He also had an army of other parrot individuals equipped with his weapon designs act as his security forces and servants. Arpeggio's blimp fortress managed to act as a slight substitute for him to be able to be in the air. His small size was also compensated for when he used a mechanical birdcage on wheels to travel. Still, the evil mastermind wanted a way to make up for his feeble body.

At some point, Arpeggio became fixated on the infamous owl, Clockwerk. The ancient bird had kept himself alive for thousands of years with a new, robotic body, and immense feelings of jealousy, anger and hate toward the Cooper family. After being defeated by Sly Cooper and his allies, Clockwerk was reduced to a pile of immobile parts put on museum display. Arpeggio was determined to use this mechanical frame to give himself a new body. However, his purpose was no longer merely to be able to fly, but to become immortal, through Clockwerk's mastery of hatred.

At some other point, Arpeggio met the young Neyla, who had an impressive ability of persuasion and manipulation of others. She was said to be his protégée, though the extent of their relationship is unknown. She agreed to serve as his lieutenant in his endeavors to gain power through Clockwerk. Despite her seemingly unwavering loyalty, Arpeggio was unaware that Neyla was truly only concerned with her personal interests. Their affiliation to each other was kept a dark secret to all but themselves.

Sly: You're going to Paris to unleash a hypnotic light show of hate. That's outlandishly cruel!
Arpeggio: Cruel, perhaps, but necessary to give Clockwerk his spark of immortality...
― After Arpeggio explains his plan[src]

At some point, a criminal organization, the Klaww Gang, was assembled, with Arpeggio as chief inventor and leader of the gang. His brilliance made him the mastermind behind their illegal spice trading ring, which would be the starting point of his ultimate goal. Arpeggio knew that bringing together the Clockwerk parts would not be as difficult as creating a large amount of hatred. The Clockwerk Frame needed hatred in order to be fueled to immortality. Arpeggio concluded that spice consumption made one angry, and they could then be hypnotized into a state of hatred. The negative energies would bring forth Clockwerk's immortality, which Arpeggio desired more than anything. Each individual member of the gang contributed a significant factor to Arpeggio's plot. Dimitri was the owner of a night club in Paris, which he used to widely distribute spices in his food and drink. The spices were grown by Rajan in India. The Contessa used her hypnotist expertise to be used on Arpeggio's blimp, which would transmit flashing lights to hypnotize those in Paris that had consumed the spices. Jean Bison managed to collect the energies of the Northern Lights to use as waves in this mesmerizing process. Ultimately, Arpeggio would use his blimp to create a hypnotic light show to hypnotize the citizens of Paris into extreme hatred and would then harness this energy to power Clockwerk.

Despite their contributions, none of the other the Klaww Gang members were aware of Arpeggio's intent to become immortal. Arpeggio used the Klaww Gang to orchestrate a break in at the museum and steal the parts. Each member was given some of Clockwerk's pieces, which they used in their own trivial schemes. Arpeggio held onto the Clockwerk brain. He then prepared for the next portion of his plan alongside Neyla, whom the rest of the Klaww Gang saw as a mere police officer; she had gone undercover within INTERPOL as a constable and partner to Carmelita Fox. Behind-the-scenes, Arpeggio and Neyla devised a way to get the other parts back from the rest of the gang. Sly Cooper and his close friends, Bentley and Murray, broke into the same museum in hopes of stealing and destroying their old foe's pieces. They were confronted by Inspector Fox and Constable Neyla. Carmelita revealed that the parts had already been stolen, believing Sly had the motive, and Neyla pointed out that the crime scene made it look more like a Klaww Gang operation. Sly was interested in the gang name, it being his only lead on finding Clockwerk's parts, and escaped.

With Sly on the scent, Arpeggio waited while he defeated the other members and collected the parts for him. All the while, Neyla assisted Sly and his gang, though she truly just wanted to go after the parts herself. Arpeggio was first seen by the Cooper Gang while attending a ball at Rajan's palace along with the rest of the Klaww Gang, except Dimitri who was at this point imprisoned. Arpeggio may have been a possible VIP guest. He was taken in a recon photo, and Bentley described him as a specialist in exotic technology. Neyla later revealed her true colors to the Cooper Gang, and was allowed to toss them in jail by Arpeggio, overjoyed to finally be able to pursue the parts alone. She then betrayed INTERPOL, even after being promoted to Captain due to her actions in apprehending the Contessa. Sly and his gang made it out of prison and continued gathering parts. In Jean Bison's camp, Sly overheard a telephone conversation between Bison and Arpeggio, the latter being heard on speaker. Bison was trying to convince his friend to sell him the Clockwerk Brain, but Arpeggio pointed out that Bison already had more parts than anyone else. Later, in Bison's second base, he discovered the Cooper Gang and took them prisoner. His men raided their hideout and stole all of their accumulated Clockwerk parts.

Jean Bison sold every part to Arpeggio and had them transported to his blimp, which was en route to pick up the large battery containing the Northern Lights. Sly and his allies escaped imprisonment, defeated Bison, and went to stow away on Arpeggio's blimp. They were lifted into the air when the blimp picked up the battery, Arpeggio unaware that the gang had emptied it of its electric charge to stuff themselves inside. They devised a plan to get inside Arpeggio's Blimp HQ and stop Clockwerk from being reassembled. Time was short, however. The blimp was on its way to Paris, where Arpeggio's plans would come together, though the Cooper Gang was unaware of this. Inside the Blimp HQ, Sly took recon photos and found that Clockwerk's body had already been put back together. A pair of spinning magnetic inducers circling the Blimp HQ's walls were holding the parts together. At the front of the HQ, Sly discovered that Arpeggio and Neyla were aboard, waiting to power up the Clockwerk Frame. Bentley told him to reverse the polarity of the magnetic inducers, hoping that the result would pull Clockwerk apart. This, however, had the opposite effect. The parts fell from their wires holding them up to the ceiling, but were locked together instead of breaking apart.

Arpeggio and Neyla were alerted by the shocking boom, which also destroyed the equipment and desk in Arpeggio's office (and killed his four men who were on patrol, if Sly had not defeated any of them at the time). They came out to see what had happened, and Arpeggio was greatly pleased to discover that Clockwerk was locked together. He and Neyla went down to the lower platform where Clockwerk's body lay in wait. Sly revealed himself, much to Neyla's dismay. However, rather than being angered with Sly's appearance, Arpeggio was grateful for his inadvertent contribution to his plans. Sly expressed to Arpeggio his disappointment in the parrot's plan to gather the Clockwerk parts for the sole purpose of gaining flight like other birds; Arpeggio explained that flight was not the primary reason for assembling Clockwerk. He illustrated how everything had played out to his and Neyla's exact specifications and how he was getting ready to fuse with Clockwerk to become a new, immortal being as the Paris light show caused immense hatred among the city's population. Sly described Arpeggio's forced hatred on the Paris citizens as "outlandishly cruel," but Arpeggio was unconcerned with all but his success and eternal life. He then told Neyla to keep Sly covered as he approached Clockwerk, but at that instant she betrayed him. Using her whip, Neyla knocked over Arpeggio's birdcage, leaving him helpless on the floor. She then leapt in front of him, and knelt down to her former master, taunting him. Neyla had been manipulating Arpeggio all along to get Clockwerk for herself.

Neyla called Arpeggio stupid for not believing she would double-cross him just as she did everyone else. She then turned to Clockwerk and jumped inside his open mouth. The body then slowly rose, its eyes glowing. Arpeggio was distraught at Neyla's betrayal, saying that she was his protégée, not the next candidate for his immortality. He demanded that she exit the Clockwerk Frame, trying to conjure some threat. Before he could finish speaking, Arpeggio was crushed by Clockwerk's Beak, killing him. His feathers scattered, his wheel-cage was shattered, and his monocle rolled to a stop at Sly's feet. Neyla then proclaimed herself to be "Clock-La," and flew through the Blimp HQ's front window. However, the maniacal monstrosity was defeated by the Cooper Gang, and Arpeggio's plans never came to fruition.

Arpeggio was a tiny parrot with a yellow beak and green feathers. He had blue hair, blue eyes, and wore a red cap and monocle. The mechanical birdcage on wheels that he traveled in was operated by turning metal cranks and a directional flap on its back. It had light curtains around it, a perch hung from a wire inside that Arpeggio sat in, and Arpeggio's insignia on a gold tile above him. In his in-game model, he has a small moustache.

Arpeggio was very self-conscious of him not being able to fly due to his small and frail body, and it pushed him to do anything to gain a new one. This lead him to study Clockwerk and seek the parts to his body, although it later became about immortality that he sought, not just a new body. His methods to achieve his goal included betraying the other Klaww Gang members and driving the city of Paris into a state of hatred.

He lacked the ability to fly, though made up for this with his intelligence. 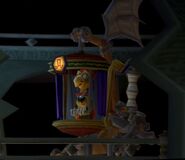 Arpeggio in India, at Rajan's Ball.

Arpeggio as a child.

Arpeggio as a teenager.
Add a photo to this gallery