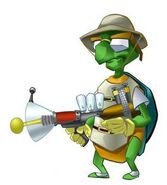 Early concept art of Bentley's main weapon prior to being changed to the crossbow used in the final version of the game.
Add a photo to this gallery

Retrieved from "https://slycooper.fandom.com/wiki/Bentley%27s_crossbow?oldid=133971"
Community content is available under CC-BY-SA unless otherwise noted.