After I crush the Cooper Gang, I'll put them all in the circus. Maybe even shrink that van of theirs down and turn it into a clown car! How fun!
― The Black Knight[src]

The Black Knight was the name of the persona and metal suit of armor created by Penelope for her own use while she was working for Cyrille Le Paradox. She used the persona to take over Medieval England and capture Sir Galleth Cooper. She was the main antagonist of "Of Mice and Mechs" of Sly Cooper: Thieves in Time.

The Black Knight was voiced by Annette Toutonghi.

Le Paradox had hired Penelope to take over Medieval England and steal Sir Galleth's cane for him. Penelope utilized her knowledge of machines to create her own suit of armor, nicknamed the Black Knight. Unlike her previous Black Baron suit,[1] the Black Knight was larger and more powerful, and even has the ability to be upgraded into a giant mech that was four times as large.

Penelope took this a step further; she created a new robotic guard and manufactured them to make a large army to patrol Medieval England. Sir Galleth attempted to combat these guards and this new mysterious robot, but Penelope equipped the armor with multiple weapons, such as rocket launchers, that took care of Galleth easily.

When the Cooper Gang traveled to Medieval England, they learned that the robot was cooking up some type of medieval operation. The robot would never leave the castle, and if so, it would only be the check up on operations in the blacksmith shop. She ran a huge production operation within a few buildings in town, the shoemakers, the caverns and the bakery. Since whatever operation was being run couldn't be good, the gang had to work together to bring it to a halt.[2]

At first, the gang believed that the robot was conscious and did not have anyone in it, but they soon realized that Penelope was the one controlling the armor, sending Bentley into a state of depression, and leaving the rest of the gang to deal with her. The gang stormed into the fort to confront her. When Sir Galleth attempted to smash the Black Knight armor, she took his cane and gave it to a rat trooper. She utilized her giant mech in a battle against Sly Cooper, who managed to destroy it, but caught himself under a piece of the armor. Before Penelope could silence Sly, Bentley came to his rescue in his own mech-suit (made from the remains of the Moat Monster) and defeated Penelope and her suit. After her defeat, she was sent to a high-security prison, but eventually escaped.[3]

The Black Knight is a black suit of armor that makes the wearer look strong and bulky. It has a red light that allows the wearer to see through the armor, and makes the wearer's voice sound more mechanical. When walking, the ground shakes on every step the armor makes. The armor is equipped with powerful metal fists and a giant axe that can be used in battle, and is able to be upgraded into a much larger version.

The larger mech is white and very bulky. It does not come with a voice modulator as the standard Black Knight armor does, but it is more powerful in its attacks. It has a rocket launcher that can fire numerous rockets at once, a large laser, and the arms and core can even put an energy shield around the entire mech. The shield itself has a few weak points that can be fired through, and if the arm or core that is generating the shield is damaged, the shield falls. This version of the Black Knight also lacks legs, making it remain stationary.

The Black knight can punch and use melee attack combos in its first form. This combo includes punching the player about two times, then jumping up to smash the ground. In its first form, it also has a red light projected from its visor-like light on its head. This light acts as a flashlight, and if you are caught in this radius, you are seen (this only happens in the missions where you tail the Black Knight). The Black Knight also has a standard medieval axe, but never uses it.

The Black Knight has most of its abilities in its large mech form. In this form, its attacks are very similar to the Moat Monster's attacks, but it also has some different ones. The Black Knight can punch the ground with its giant arms and cause the ground to shake, and can also shoot out rows of missiles. Also, in its large mech form, it can shoot massive blue lasers out of its eyes (these lasers cut Sly's ropes to the Black Knight's arms if he isn't fast enough). It can also summon small robotic dragons that don't take to much damage and are killed in one hit, but can be a menace if there are multiple ones. Finally, it can project a red circular force field that protects it's arms and chest. However, this force field has several holes in it and Sly can easily slip arrows through these holes. If the player hits both arms twice and disarms the large mech's massive arms, it still has most of its arsenal and is only unable to punch the ground. 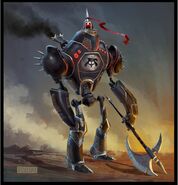 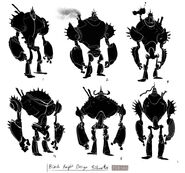 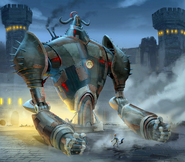 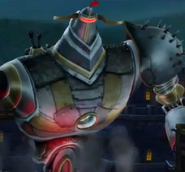 The Black Knight in a cutscene. 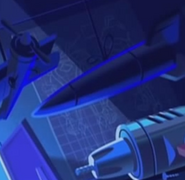 The Black Knight's blueprints on a wall in Penelope's room.

The Black Knight appearing alongside Clockwerk in Bentley's imagination