Edit
This article is about the Clockwerk part from Sly 2: Band of Thieves. For the treasure found in Sly Cooper: Thieves in Time, see Clockwerk's Eye.

Sly Cooper (One)
Murray (One)

Sly Cooper and the Thievius Raccoonus

Sly Cooper: Thieves in Time (One only)

And see I did off the port bow, the frightening gaze of an eagle. My strong and seaworthy crew, transfixed in its terrible gaze, lay motionless and silent. All but myself fell victim to its heart-stopping stare - perhaps my eye patch protected me during the ordeal - and I alone manned the ship away from the flying beast. I fear it may strike again...
― An account by Henriette "One Eye" Cooper in the Thievius Raccoonus[1]

The Clockwerk eyes were one of the parts that helped Clockwerk survive for hundreds of years. One of Clockwerk's most peculiar components; according to Henriette Cooper's entry in the Thievius Raccoonus, Clockwerk's eyes had the ability to stop opponents dead in their tracks, transfixed in their alluring gaze.[1]

Clockwerk replaced his organic eyes with robotic ones so that he could stop himself from aging, live on forever, and also become super-powered.

Sometime during Henriette Cooper's life, she came in contact with Clockwerk, who used the hypnotic quality of his eyes to transfix her entire crew, causing them to stand completely motionless and silent. Henriette, however, was not affected. She speculated in an account in the Thievius Raccoonus that it was only her eye patch that protected her from being hypnotized.[1]

It was because of this powerful hypnotic quality that the Contessa took the eyes as her personal share of the Clockwerk parts. She implemented the parts in her re-education tower by adding them to her mind shuffler to enhance their capacity. Her first attempt to utilize her newly enhanced device was an attempt to brainwash ex-Inspector Carmelita Fox, who had been restrained in an Iron Tech-250. The Contessa wanted Carmelita to become her personal slave and take the fall for her at INTERPOL.[2]

The Cooper Gang intended to steal the parts from the Contessa, but one of the eyes had been stolen by Constable Neyla during their heist. Sly chased Neyla and managed to pry the part from her, then fought the Contessa to win the eye only to have her take it back. Additionally, Bentley had the eye that he took confiscated by Carmelita. Murray chased Inspector Fox down with a tank, and after defeating her, took back the eye that Bentley originally nabbed. The Contessa used it in the following battle against Sly, but failed to subdue him and was defeated.[3] The part was later found by Jean Bison who in turn sold the eyes, along with the other Clockwerk parts, to Arpeggio.[4] This made it the only Clockwerk part the Cooper Gang lost multiple times. One of the eyes disintegrated along with the rest of the Clockwerk parts when the Hate Chip was destroyed by Carmelita.[5] The eye that survived, however, was later sent back in time to the Ice Age.[6]

Sly holding one of the Clockwerk eyes

Recon photo of the Clockwerk eyes 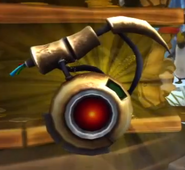 One eye, as seen in Thieves in Time