Sly Cooper Wiki
Register
Don't have an account?
Sign In
Advertisement
in: Collectibles, Items, Sly 2: Band of Thieves,
and 2 more

Edit
watch 01:25
Jurassic World: Dominion Dominates Fandom Wikis - The Loop
Do you like this video?
Play Sound
This article is about the collectible items from Sly Cooper and the Thievius Raccoonus, Sly 2: Band of Thieves and Sly Cooper: Thieves in Time. For the prize found in Bentley's Hackpack, see Clue Bottle (prize).

Clues are found in jobs within the first four episodes. Every job that has clues will have 20-40 bottles. The special abilities contains within each safe are contextualized as missing pages from the Thievius Raccoonus and appear as torn, yellowing pages when collected.

One vault in each world, except "The Cold Heart of Hate," has a reward that allows Sly to see where clues are located, through the help of his binocucom. When viewed in the binocucom, clues are marked with green reticles.

There are always 30 clue bottles located in the episode hubs, and are not found indoors. The vault is hidden somewhere on the map, whether in a job area or another secret area solely for the safe. Unlike in Sly Cooper and the Thievius Raccoonus, the presence of the abilities within the safes is not explained, and appear as an icon representing the action that the ability contains.

In addition, this game introduces ThiefNet, meaning clue bottles are no longer the only way to obtain new abilities. Also, clues can no longer be located through help of the binocucom.

In The Sly Collection, the noise of the clue bottles can be heard from a greater distance than in the PlayStation 2 version.

Absent from Sly 3: Honor Among Thieves, clue bottles have returned in the fourth game. There are 30 of them in each hub world, and the vault unlocked in each world via the bottles contains a permanent upgrade to every playable character.

One of the vault prizes, Clockwerk's Eye, allows the player to see where clues are on the map. It is obtained from the vault in "Clan of the Cave Raccoon."

Unlike in Sly 2, Breaking bottles now creates a quieter sound.

The Clue Bottle can be found as a prize. For more info, see this page.

In the games thus far, clue bottles are green, with a yellow question mark label and a piece of paper sticking out the top. In each game, they also "dance" on the ground, but in Sly 2 and Thieves in Time, they make a clinking sound so the player can locate them easier. 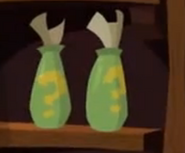 Clues on a shelf in the safe house