A weapon so shocking, it might even be called infamous. Bust this out when you want to zap your enemies... or just make your fur stand on end!
― In-game description[src]

Cole's Amp is an unlockable in Sly Cooper: Thieves in Time. It replaces Sly Cooper's cane with Cole MacGrath's Amp from inFAMOUS 2. It requires collecting all 60 Sly Masks to unlock.

This weapon, true to its origin, has the capability to electrocute enemies with each hit, which makes them unable to hit you while they're being electrocuted. In spite of electrocuting enemies, it still takes several hits to defeat them. 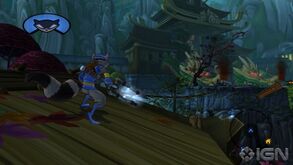 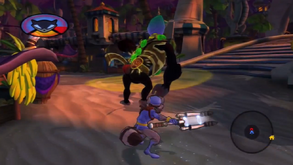