Dodos are rooftop guards in Clan of the Cave Raccoon of Sly Cooper: Thieves in Time.

The dodos have long yellow legs and feathers of reddish-brown color. They also have large hatchet-like yellow beaks that are their primary weapon. They attack by ramming with their beaks or slamming down near you and throwing snowballs. They occasionally attempt to dodge the players attacks. 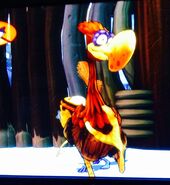 Sly sneaking up on an itching Dodo.
Add a photo to this gallery

Guards in Sly Cooper: Thieves in Time
Retrieved from "https://slycooper.fandom.com/wiki/Dodo_guard?oldid=124694"
Community content is available under CC-BY-SA unless otherwise noted.