Sly Cooper Wiki
Register
Don't have an account?
Sign In
Advertisement
in: Locations in Sly Cooper: Thieves in Time

Of Mice and Mechs[]

Main article: Of Mice and Mechs

The Cooper Gang time traveled here to locate Sir Galleth. They learned that he was captured and forced to perform in a circus for someone known as the Black Knight.

Notable landmarks include the Black Knight's castle, a small marketplace and the titular town.

The setting of Medieval England consists of many buildings. The city is surrounded by water, but features mostly high elevation and several large stone walls. The town features several wall hooks that allow Sir Galleth to perform his Catapult Crash technique on. Also, there are several catapults placed around town that can toss players to several locations, but it's advised to be mindful of where they're aimed.

The gang's hideout was situated within a tree house on the southern end of town. The hideout was located near the carnival area, which sat just west of it.

The carnival is located on the western side of town. The circus is placed within a giant red and white tent. The Black Knight imprisoned Sir Galleth in here and forced him to perform in the circus as a jester with a costume. In "Juggling Act," Sly had to don an Archer Costume and navigate through the circus to reach Sir Galleth. Inside the tent were several platforms, tightropes, traps and hazards such as cannonballs and fire. According to Bentley, the floor was rigged with motion detectors, which prevents Sly from exploring the tent at ground level. On the game's map, the circus tent where Galleth is held is called "The Amazing Cooperoni".

The cavern was one of the most important locations in the gang's operation. Sly visited this area in search of Metal for his costume. When Sly visited this place, it was filled with guards sitting at the tables conversing.[1] Bentley revealed that the Black Knight had converted the tavern into a fuel production facility for the robotic guards. Later, Murray had to break into this area and destroy the mixing system vats to shut down part of the Black Knight's operation. This place had porcupine guards and rat trooper guards patrolling the area.[1] On the game's map, the tavern is called "Stirring Up Trouble".

The shoemakers was one of the most important locations in the gang's operation. Sly visited this place to find some Leather for his costume. At first it appeared to be a ordinary shop with the back door blocked off, but after Sly climbed up a rope to get to the other side, it is revealed to have machines fabricating giant robot parts. Later, he had to revisit this area and pull the plug on part of the Black Knight's operation.[1] On the game's map, the shoemaker shop is called "A Total Fabrication".

The bakery was one of the most important locations in the gang's operation. Sly visited this place looking for Wood for his costume.[1] In order for Sly to enter the building, Bentley had to remotely hack a computer terminal to allow access. It was rather small on the inside, only featuring one room with flaming furnaces and several breakables. Later, Bentley revealed that the bakery was main power source for the tavern and the shoemakers' production facilities. Sir Galleth also entered this area to shut down the rest of the Black Knight's operation.[1] Because of his Catapult Crash technique, only Galleth could reach the bakery's second floor. The second floor contained three sub-generators connected to a central device. If one of the generators were disabled, then the system would automatically try to reset itself and activate lasers to protect the other generators. After Galleth disabled all of the sub-generators, the second floor was destroyed when malfunctioning main generator exploded. On the game's map, the bakery is called "Into the Fire".

Lair of the Moat Monster[]

Located on the northern end of town, west of the Black Knight's castle, is the lair of the Moat Monster. Sir Galleth searched this area for the monster, in order to prove to Bentley that the monster does indeed exists. This area featured a dark, murky cave that lead to a large metal wall featuring many moving parts. The robotic monster was found and fought on top of this structure.[3]

The blacksmith's shop was a notable location in the mission "Shell Shocked Heart." The Black Knight visited this shop to check up on his operation. Bentley followed him inside to get some intel on him. The building featured rafters that were suitable for eavesdropping. It was here that Bentley found out the truth about Penelope.[2]

The most notable location in Medieval England, the Black Knight's castle, is located on the northern half of the city, and can be seen from most locations. The Black Knight would never leave the castle, except to check up on operations in the blacksmith's shop. It was here that the gang took down the Black Knight.[4]

The Cooper Gang in England. 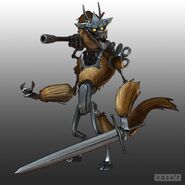