They were fiery turtle skeletons summoned by Mz. Ruby, who was attempting to create her own army of ghosts. Their weapon of choice was their own flaming head, which they could detach and use as projectiles. Sly would need to avoid their attacks and get close enough to strike. Once he was close enough, they would stop attacking and cower in fear. 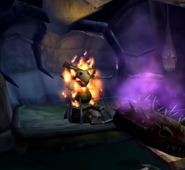