Sly Cooper Wiki
Register
Don't have an account?
Sign In
Advertisement
in: Alive, Characters in Sly 3: Honor Among Thieves, Jailed,
and 2 more
English

General Tsao is a rooster and self-appointed leader of a village in the Kunlun Mountains in China. He was the main antagonist of the "A Cold Alliance" episode of Sly 3: Honor Among Thieves. He is obsessed with his family line, believing that it is superior to any others. He wishes to force the Panda King's daughter, Jing King, to marry him in order to create an even stronger lineage. In combat, Tsao uses both his skill with his bladed shield and his mastery over dark magic to defeat his foes.

Little is known of Tsao except that he came from a long line of vile warriors who presumably had some sort of vendetta against, or at least knowledge of, the Cooper Clan.[1][2]

When the Cooper Gang arrived in China to recruit the Panda King to help out with the Cooper Vault heist, he only agreed to on the condition that they help him to rescue his daughter, Jing King, who was being forced to marry Tsao against her will. The gang realized that the wedding date was on that Saturday, which meant they didn't have much time.

After attempting to fool Tsao as part of their operation, he caught them off-guard and entered their safe house, stealing the ThiefNet laptop in the process. Tsao then lured Sly Cooper into a sacred battle ground where his ancestors had fought off many opponents in the past and the power that was released from them remained in the area (which allowed the combatants the ability of flight). The two fought one another with Sly emerging victorious, taking back the laptop, but with Tsao managing to escape.

Despite seeming to know everything about the gang's plans, Tsao seemed completely oblivious about the gang's operation and had no idea that Jing King had escaped whilst a certain cop, Inspector Carmelita Fox, had taken her place to arrest him shortly after, who had mistaken him for Sly thanks to a set-up by the gang. Tsao got wind of the gang's attempt to steal his family's treasure but was too late to stop them from blowing up the temple and making off with the treasure. Enraged, Tsao summoned a dragon to kidnap Penelope and attack Sly, though the raccoon managed to defeat it. The arrogant rooster still thought he'd won as he believed he still had the real prize, the bride.

During the wedding, Carmelita tazed Tsao with her shock pistol and arrested him. Though she was disappointed she didn't capture Sly, she still took this opportunity to take Tsao to jail as he had let undead praying mantis vampires run through the streets of the village. From what Sly had heard, the villagers were happy to see him behind bars.

General Tsao is a white-feathered chicken. He wears a purple gi with a golden plate on his torso. He has purple circles under his orange eyes, a yellow beak with a small black Fu Manchu. On his head is a purple and gold helmet with a large red feather and around his wrists are golden cuffs.

I've faced a lot of bad men in my time... but you, sir, are the worst.
― Sly during his encounter with Tsao

Tsao is obsessed with his family line, believing it to be superior to all others. This leads him to seek a wife from a bloodline he considers worthy. He apparently respected the Panda King during his criminal years, and thus wanted to marry the King's daughter so that his children would have the lineage of both himself and the Panda King.

General Tsao is also known for being incredibly cruel, caring for nothing but himself. Bentley even witnessed Tsao kick a puppy twice.[3] He is also misogynistic, believing that as a woman, Jing King "doesn't know up from down", implying that he has no respect for her other than the prestige that his bloodline would gain by merging with the Panda King's. Tsao is so unlikable that Sly considered him to be the worst of all the villains he had faced up to that point.[1]

Tsao is a powerful combatant, easily as strong and agile as Sly himself. In addition, he is a master of black magic. In battle, he used this to unleash streams of fireballs, send waves of zombie hands across the ground, and summon dragon spirits. He later used this magic to unleash an army of Jiang Shi vampires, and also to bring the dragon statue in his treasure temple to life, using it to attack the Cooper Gang. It is possible that Tsao's Black Magic may be part voodoo, making him similar to Mz. Ruby in this regard.

General Tsao's main weapon is a golden shield engraved with the Chinese word "王子" (wángzǐ, meaning "prince" or "son of a king"), likely in reference to his desire to marry Jing King. In battle, a spinning array of blades emerges from the rim of the shield, essentially turning it into a large buzzsaw. The shield is also the model for Tsao's master computer avatar, a computer program he set to guard his personal files; the avatar is instead adorned with the yin-yang symbol.

Notably, Tsao is the only villain the Cooper Gang never brought down on their own, due to his resourcefulness and ability to plan ahead. While every other adversary they faced was eventually brought down or destroyed, then hauled off to jail by Carmelita, the gang was forced to flee and instead leave Tsao's capture up to Carmelita's trickery. 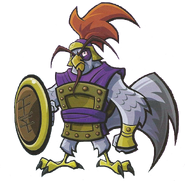