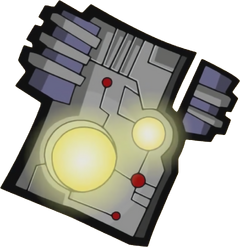 The Hate Chip was an essential component of Clockwerk's body that helped keep him alive for thousands of years. It fed off of the hatred that he had for the Cooper Clan, and turned it into a fuel that kept the other mechanical parts in working order.

Clockwerk held a great hatred over the Cooper family line, and the chip used this hatred as fuel for his mechanical parts. When Sly Cooper and Clockwerk fought in the Krakarov Volcano, the chip prevented Clockwerk's parts from melting in the lava, keeping them in perfect shape even after the violent battle.

When Neyla bonded with the Clockwerk frame in Sly 2: Band of Thieves and became Clock-La, Bentley heard her mention the chip in her boasting and deduced it as the source of her power. After a lengthy battle over Paris that brought Clock-La to the ground, the Hate Chip was destroyed by Inspector Carmelita Fox. Shortly after its destruction, the remaining Clockwerk parts began to rust and decay, except for one of the eyes, which mysteriously ended up in a safe in the ice age, implying the evil bird would be found again.[1]

Carmelita gives Clockwerk the boot.
Add a photo to this gallery

Sly 2: Band of Thieves
Retrieved from "https://slycooper.fandom.com/wiki/Hate_Chip?oldid=128805"
Community content is available under CC-BY-SA unless otherwise noted.