Sly Cooper Wiki
Register
Don't have an account?
Sign In
Advertisement
in: Episodes in Sly 2: Band of Thieves

He Who Tames the Iron Horse

He Who Tames the Iron Horse

"Menace from the North, eh!"

What a low-tech guy like Jean Bison is doing with robot parts is a mystery. I almost don't want to know. But as always, it's only a matter of time before I find out.
― Sly, on Jean Bison using multiple Clockwerk parts[src]

"He Who Tames the Iron Horse" is the sixth episode in Sly 2: Band of Thieves. It takes place in Nunavut Bay, Canada, and the main antagonist is Jean Bison. The Cooper Gang's main target is his Iron Horse trains.

Following the latest Klaww Gang spice shipments, the gang makes their way to Nunavut Bay, Canada; the secrect hub of Jean Bison's shipping empire. It was revealed as a young man, Jean traveled to Canada to strike it rich during the Gold Rush of 1852. A reckless prospector, he took some chances and ended up buried alive in an avalanche.

The quick freeze miraculously kept Bison alive and 120 years later, he thawed out... because of global warning. A product of Bison's time, he dreamed of taming the "Wild North" by damming every river and using an axe to chop down all the trees. Shipping spice for the Klaww Gang proved a lucrative way to bankroll Bison's one man war against nature and yet, Sly almost felt sorry for Bison. He's just a guy from the 1850s. He'd be a hero back in his day, but he's a villain in modern times. Sly said that either way, Bison had more than his fair share of the Clockwerk parts. Sly wondered what would a low-tech guy like Jean Bison do with robot parts. Sly didn't want to know, but it'll be a matter of time before he found out as always.

With the successful outcome of the heist, all 3 of Jean Bison's Clockwerk parts now belonged to the Cooper Gang. In addition, they managed to put Jean's 3 Iron Horse trains out of commission and shut down spice distribution across North America. Needless to say, the Cooper gang were pleased with themselves.

Unfortunately, Carmelita had to evade the police again. Which was fun at first for Sly, but starting to feel sorry for her. Sly wondered what if they replaced Carmelita with somebody else. Sly didn't want another police person chasing him, he states that Carmelita is the reason why the capers are so much fun. Sly realized that he has to find a way to clear Carmelita's name sooner or later, besides turning himself in. 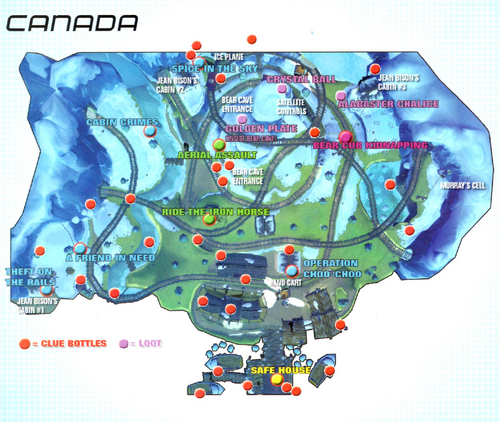 The vault in this episode is opened with 1-2-9, and gives you the Music Box which causes guards to fall asleep for a short period of time.

Sly! Come in! Sly! Do you read me?
This article or section is missing a video.