Henriette "One Eye" Cooper sailed the seas and stole from pirates... guess I really take after her.
― Sly Cooper[src]

Henriette "One Eyed" Cooper was a female member of the Cooper Clan, and a pirate from the 17th century colonial Caribbean.

Henriette sailed the seas and stole from other pirates. Originally wielding a dagger with the Cooper crook serving as the handle, she presumably lost a hand and replaced it with a prosthetic hook shaped like the trademark Cooper crook. She was immortalized in the Cooper Vault, along with her loot and hook on display. She protected her loot with an obstacle containing overturned boats with flaming skulls on a pulley system.

When Sly Cooper viewed her portrait in the Cooper Vault, he commented that he "takes after her," referencing his pirating adventures in Blood Bath Bay.

At some point in her life, Henriette met Clockwerk. He flew near her ship and used the hypnotic abilities of his eyes to transfix her entire crew. Henriette, however, was not affected, and speculated that it was due to her missing eye that he could not hypnotize her.[1]

While in Arabia, 1001 AD, it was revealed by Bentley that in the year 1616, Henriette stole Sinbad's legendary goblet filled to the brim with coins if she was born in 1590 and stole Sinbad's in 1616 then she had to be 26 back then. [2] Sly was tempted to steal the coins himself when he was near it, but Bentley reminded him that even touching the coins could wake the nearby guards, as well as altering the timeline in a way that could result in catastrophic changes in the future, even preventing Sly from becoming a thief.

Henriette's section in the Cooper Vault.

Concept Art of Henriette's section in the Cooper Vault

Closer look at Henriette's section in the Cooper Vault. 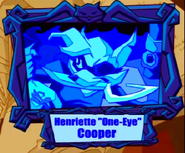 In Sly Cooper and the Thievius Raccoonus.

Henriette in a cutscene of Sly Cooper: Thieves in Time.