Ah, the humble recon photo, the unsung hero of many a caper.
This article or its infobox requires more images or images of better quality.

Sly 2: Band of Thieves
The Klaww Gang (or KLAWW Gang)[1] was an international group of villains that produced and distributed illegal spice. After some time, they utilized the stolen parts of Clockwerk to accelerate spice production in addition to their own personal schemes. They were eventually defeated by the Cooper Gang and Carmelita Fox.[2][3][4]

The Klaww Gang's apparent plan had been to use illegal spice for profit. While Rajan produced the spice in India and shipped it around the world, Jean Bison utilized his Iron Horses to spread the shipments across the North American continent. The Contessa used her incarceration facility in Prague to hypnotize criminals who consumed the spice into revealing the location of all their stolen loot. Dimitri used his nightclub to assist in having the citizens of Paris purchase it. Once they stole the recovered components of Clockwerk, founder of the Fiendish Five, and adapted the components for their own use via Arpeggio, their spice operation accelerated in profit. Rajan was able to produce ten times the amount of spice than before. The Contessa was able to increase her hypnotic abilities. Jean Bison was able to improve his trains so they could run endlessly day and night. Clockwerk's body allowed Dimitri to begin a counterfeiting operation, with the refined alloy in the tail feather's composition doubling as printing plates.

The actions of the Klaww Gang earned the attention of Sly Cooper, who began hunting down each of them to recover their stolen Clockwerk Parts. However, Arpeggio as part of his own grand design, planned on luring the Cooper Gang to steal the parts from his cohorts, and eventually hoped to steal them all back and keep them in his possession. Rajan would grow the spice as part of the original plan; meanwhile, Arpeggio would assign Jean Bison to convert the Northern lights into energy, store it in a battery, and ship the spice to Paris, where Dimitri would distribute it throughout the city. Hypnotic devices created by the Contessa would be powered with the Northern Light energy to deliver the same hypnotic frequencies as her own devices in Prague (but at a far longer range since the ones in Prague work at close range to specific people). After integrating these methods into his blimp, Arpeggio would fly over Paris and the spice consumed by Paris' citizens would allow the Klaww Gang to enact mass hypnosis, putting them into a violent rage.

It is implied this plan of Arpeggio's was given the rouse as being an extension to the original and was to be used to help increase the purchasing of spice for their operation. In reality, the rage generated by the hypnosis would create a massive hate generator which would empower Arpeggio once he merged himself with a reassembled Clockwerk to become immortal. It is unknown what his plans were once he would have obtained immortality.

After fully developing the plan and having purchased the Clockwerk Parts from Jean Bison, Arpeggio set his blimp on course to Paris from Canada and began reassembling Clockwerk for the final stage in his concocted vision. Sly Cooper, having infiltrated the blimp, unintentionally locked the Clockwerk pieces together instead of breaking them apart and alerted Arpeggio of this new development. Impressed by Sly's actions, Arpeggio thanked Sly and prepared to merge himself and finally execute his plan. Immediately, Neyla, Arpeggio's protégée, betrayed him and merged herself with Clockwerk's body instead. Dubbing herself "Clock-La," she crushed the helpless Arpeggio with Clockwerk's beak, killing the former. With the death of Arpeggio and the later destruction of Clock-La, the Klaww Gang collapsed without any members left active.[4]

After their respective defeats, the surviving members of the Klaww Gang went their own ways.[5]

When the Klaww Gang stole Clockwerk and scattered the parts around the world from the Museum of Natural History in Cairo, Egypt, they divided the parts among the five of them. The parts they took depended on what was most useful to the member.

Each member of the Klaww Gang employed a number of guards to protect and patrol around their various facilities: 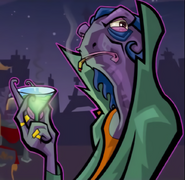 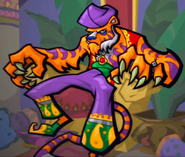 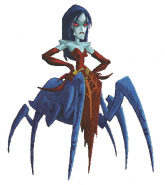 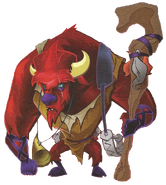 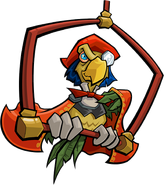