After discovering it in the Cooper Vault

The laser slide technique was developed by Sly Cooper's father, Conner Cooper. It was a variation of the Rail Slide and it was one of the known Cooper techniques not incorporated into the Thievius Raccoonus.

By utilizing the laser slide, Sly was able to slide along lasers that would harm him in any other circumstance. Since he was the only living person with this ability, he was able to cross long distances by himself, unassisted by any plane or jetpack, provided there was a laser being fired between where he stood and where he intended to reach. It provided almost impassable security against any non-Cooper from accessing an area that only a Cooper should access. Conner Cooper developed the move for that very purpose, to protect the Inner Sanctum of the Cooper Vault from non-Coopers.

Sly utilized the laser slide only during his entry into the Inner Sanctum, and in battle against Dr. M, who had managed to avoid the laser challenge by flying across the chasm.

It could be used by pressing

while in the air above a laser, much like the rail slide. It should be noted that the lasers can still burn Sly if the move is not performed or if Sly reaches the end of a slide and falls into the laser. 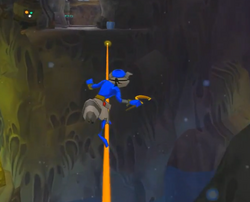 Add a photo to this gallery

Techniques
Retrieved from "https://slycooper.fandom.com/wiki/Laser_slide?oldid=138875"
Community content is available under CC-BY-SA unless otherwise noted.