Sly Cooper Wiki
Register
Don't have an account?
Sign In
Advertisement
in: Guards in Tide of Terror

Isle of Wrath, Wales
Mallet walruses (also known as Thor McCracken)[1] were guards employed by Raleigh to protect the Isle of Wrath from possible intruders. They were the first guard types to be encountered in the series.

Their attire is a red cap and blue overalls. They use a powerful mallet to crush any intruder who approaches them. When no intruders are seen, these guards will merely smash the hammer down repeatedly. With the Computer Hacking technique acquired, Sly Cooper's binocucom states that they have a good work ethic, and the scientific name for their species is ginormous mjolnirous. 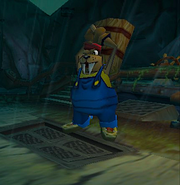