DINZA-DROGO-MADADAX!!
― A dingo guard while being possessed by the Mask of Dark Earth.[src]

The Mask of Dark Earth was the incarnation of the malevolent entity known as the Spirit of Dark Earth. The Guru kept constant watch over the mask until its destruction. It was the antagonist in "Rumble Down Under" of Sly 3: Honor Among Thieves. With the destruction of the Mask, along with the removal of the miners from Yuendumu, the Guru was free to join the Cooper Gang and Murray's Dreamtime training was completed.[1]

It is unknown when the Spirit of Dark Earth decided to embody itself in a physical object, but once it did, it began dwelling in the caves deep below the land of Yuendumu. To prevent it from roaming free and wreaking havoc, the Mask of Dark Earth was constantly kept under watch by the Guru.[2]

When miners arrived in the outback and began drilling into the land, the Mask of Dark Earth's home was disturbed.[3] As a result, it rose up to the surface and, without anyone to stop it (the Guru having been imprisoned by the miners), it prowled loose. The Mask took control of several miners during this time, causing the hosts to grow larger and become more aggressive.[4][5] Inadvertently, the Mask prolonged the miners' occupation of the Australian outback.

When the Cooper Gang arrived in the outback and found the Guru imprisoned, the Guru informed them about the Mask of Dark Earth.[2] While clearing the miners and their machinery out of the area the Gang had a couple of encounters with Mask of Dark Earth-influenced miners, and were shocked when it displayed it ability to move on its own.[4] During the final phase of the operation the Cooper Gang planned to destroy the Mask by disguising Murray as the Moon Spirit, the sworn enemy of the Spirit of Dark Earth. The plan at first seemed to be successful, as the Mask took the bait. but Murray failed to destroy it and it escaped.

The Mask of Dark Earth soon encountered Inspector Carmelita Fox and latched onto her face. Bentley tried to use his sleep darts to knock Carmelita out so they could take the Mask off of her and hopefully destroy it. Unfortunately, it had the opposite effect; the chemicals in Bentley's sleep darts reacted to the Mask and made her even bigger. Further assaults were made on the growing Carmelita but all of them caused her to grow larger. Realizing that force would not solve the problem, Sly Cooper removed the Mask manually by climbing up Carmelita's body and detaching it. Once the Mask was off Carmelita's face she returned to normal size and it was destroyed by several of Carmelita's mercenaries.

The Mask of Dark Earth is a golden mask with darker shades around the eyes, a red glowing aura, a skinny circle at the bottom middle for its mouth, holes for the eyes, and on the top part of the mask there is swirl marks for the eyebrows and several red spots on either side of the bottom that hold feathers.

The Mask of Dark Earth was able to move on its own accord, floating in mid air as it did. It possessed the ability to influence individuals' minds by latching onto their face. While under its control, the wearer would become larger, more powerful, and more aggressive than usual. The power of the mask was great as it was able to easily corrupt Carmelita, who is known to have resisted brainwashing from the combined efforts of The Contessa and the Clockwerk eyes. 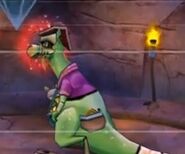 The Mask of Dark Earth taking control of a Kangaroo.

The Mask of Dark Earth taking control of a Dingo.

The Mask of Dark Earth taking control of Carmelita.