Sly Cooper Wiki
Register
Don't have an account?
Sign In
Advertisement
in: Guards in Of Mice and Mechs, Flashlight guards

English town
Mech wolves were flashlight guards in "Of Mice and Mechs" in Sly Cooper: Thieves in Time. They were artificial creatures created by Penelope to assist her in watching over Medieval England as her main security force.

After Penelope joined Cyrille Le Paradox, she was sent by him to Medieval England and developed the Black Knight armor suit. She used her mechanical expertise to create an army of mech wolves as security guards for both her castle and the town. They patrolled tirelessly and stopped only to refuel at the local tavern—The Rusty Toad.

A group of mech wolves were eavesdropped on by Sly Cooper and unknowingly gave him the locations of the materials needed to assemble his Archer Costume. Upon Galleth's escape from the circus, the mech wolves continued patrolling, searching for him and the Cooper Gang, though their efforts all failed.[1]

A mech wolf's design include a half fur, half metal exterior with a mechanical wind-up on its back as its motor. Everything below the chest, other than the tail, is made of metal. The back of it head is fur, while its face is metal with a pair of glowing yellow eyes.[1]

A mech wolf's weapons is a mini-gun that shoots small missiles and a sword.[1]

A pack of mech wolves as seen in a cutscene. 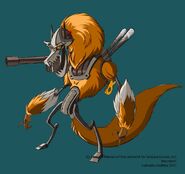 Guards in Sly Cooper: Thieves in Time
Community content is available under CC-BY-SA unless otherwise noted.