I thought I'd finished it.
This page needs to be expanded in order to include more relevant information.

I will orchestrate your demise!
― Miss Decibel while fighting Sly Cooper[src]

Miss Decibel was a villain in Sly Cooper: Thieves in Time, appearing as the main antagonist of "40 Thieves." She joined Le Paradox's gang as one of his lieutenants and was sent to Ancient Arabia. She planned on obtaining the lost masterpieces of classical musicians, such as Mozart and Beethoven.

She was voiced by Eliza Jane Schneider.

Miss Decibel was born into a wealthy British family. As a child, she had a love of performing classical music, but she was never very good at it. Everyone who went to her recitals were unimpressed by her complete lack of musical talent.

After one notably awful performance, in which the crowd threw a rotten tomato at her and booed, the young Decibel threw a volatile temper tantrum, which caused her trumpet that she was playing to fly up into the air and get stuck in her trunk.

Trying to remove the trumpet, she blew her trunk, which caused a hypnotic note to play. The crowd now seemed to enjoy her music. When she realized that she could control people with her hypnotic notes, Miss Decibel turned to a life of crime, hypnotizing innocent people into committing crimes for her. This resulted in getting the attention of Le Paradox, who decided to hire her, hoping that her skills would help him with his schemes.

Miss Decibel lured the three members of Salim al-Kupar's gang out by having a parade in the streets of Ancient Arabia and throwing lots of money around. When Salim and the thieves broke into her palace, she was easily able to capture all of the thieves, except Salim, using her modern technology. She then used her hypnotic record players to hypnotize the thieves into forging documents that that would establish Le Paradox as an esteemed member of royalty in the future. In exchange for this, Cyrille Le Paradox claimed that he would help her find the lost masterpieces of Mozart and Beethoven. However, Miss Decibel needed Le Paradox's help to feed the three thieves. The Cooper Gang was able to exploit this by disguising Sly as a delivery boy and thus were able to convince Miss Decibel to give them the locations of the three thieves.

After the thieves were rescued, the Cooper Gang planted a bug in Miss Decibel's office to find out more about the secret door in the lamp shop. Once they managed to sneak into the lamp shop and unlock the door, they found out that it was a secret underground docking station for Le Paradox's blimp. Le Paradox and Miss Decibel confronted them there and Le Paradox revealed that he had stolen Salim's cane and taken Carmelita as hostage. He told Miss Decibel to defeat Sly before joining him on the blimp.

After being defeated by Sly, Miss Decibel clung onto a rope and begged Le Paradox to let her into his blimp. A pleading Miss Decibel reminded him of their deal: romance nights by the Riviera for the forged documents. Le Paradox responded by thanking her for the documents, but revealed that he was only using the relationship to obtain the forged documents, adding that it would not have worked out between the two of them stating he's not into big noses and revealed to her his hatred for her music, saying it stinks worse than he did, laughing cruelly at her. This angered Decibel and made her see him as the lying deviant he really was, calling him a "filthy, backstabbing two-timing scoundrel!". Le Paradox flouts the comment, saying flattery will get her nowhere. Le Paradox even called her the "fat lady that sings" before cutting the rope that she was hanging onto, which resulted in her falling from the blimp. Le Paradox then escaped and returned to the present. Salim then lodged a cork into her trunk which disabled her from hypnotizing people again.

After this turn of events, Miss Decibel was brought back to the present and incarcerated. After being sent to prison, she decided to turn her life around. Her former hypnotic trumpet was removed, she enrolled in anger management classes and began a music class in the prison, much to the dismay of the inmates as her skills had not improved over the years. With continued good behavior, she may be eligible for early parole.

Miss Decibel is a green elephant (gray in cutscenes) with little ears and dark purple ear insides. She has four toes on each foot, and each toe is white. She has white hair with a black streak that looks very similar to that of Cruella De Vil. She has purple eyes with long eyelashes. She wears a big, purple robe with white fluff and yellow stripes on the arms. She wears purple glasses with transparent sky blue lenses. She has pink lipstick on her mouth, in addition to wearing a turquoise ring on her left index finger. She also has a trumpet lodged in her trunk, which gives the end of it the shape of a trumpet. At the end of Thieves in Time, the trumpet was removed, and Miss Decibel was revealed to have a normal elephant trunk, which had no real shape change since before the trumpet got stuck inside of it.

All throughout Thieves in Time, Miss Decibel had feathers lodged in the back of her robe. In prison, these feathers were replaced with porcupine quills.

Miss Decibel is versatile fighter, combining her control over sound with her natural elephantine strength. She could easily lift and toss aside Salim al-Kupar with one arm. Decibel could even shake Le Paradox's blimp while hanging from a rope. She could withstand multiple hits from Sly Cooper and, when sufficiently angered, can shrug his attacks off completely, forcing him to lure her into the electric towers on top of Le Paradox's blimp. If an enemy gets too close, she can rapidly spin around and use her trunk to bludgeon her opponent. If angered enough, she will charge at her opponent with great speed, to the point of rivalling the speed of Sly Cooper. She is so fast that Sly himself requires his Thief Costume's ability to slow down time just to keep up with her. Even after being defeated by Sly, she survived a fall from Le Paradox's blimp to the floor of his docking station.

She can use two techniques similar to Murray's Thunder Flop. The first one is performed by jumping in the air and landing on her rear, producing an enormous shockwave in all directions. During the final phase of her boss fight, Decibel can perform two smaller shockwaves by bouncing on her rear, before producing the larger shockwave on her third bounce. However, using this move briefly stuns her, allowing an enemy an opportunity to attack during this moment of weakness. The second one is virtually identical to Thunder Flop, but it doesn't briefly stun her.

By blowing large amounts of air through her trumpet, Decibel can achieve a limited form of flight to gain altitude and cross large distances.

Using her trumpet, Decibel can release sound great enough to shatter glass. She can produce pink energy beams in the shape of a music staff called a "Music Ribbon" from her trunk. Energy spheres in the shape of chords move along them, electrocuting and instantly killing anyone unlucky enough to be in their path. She can release a stream of energy from her trunk in the shape of notes to attack enemies from a distance. She can also fire energy spheres from her trunk that home in on and electrocute her opponent, however, they will dissipate if they don't reach their target after a period of time. However, she cannot use any of her powers if something is lodged in the trumpet (Salim did this by sticking a cork in her trunk).

Miss Decibel is quite intelligent, inventing record players that play hypnotic music, forcing its victim to do whatever she commands. She used these record players on the The Tiger, The Lion, and The Panther to force them to forge documents declaring Le Paradox as a descendant of royal lineage. She claimed that the forgeries they produced were of the highest quality. These devices were able to impress a genius like Bentley and were compared to the hypno-boxes used by The Contessa to brainwash Murray. These devices have to be carefully deactivated before disconnecting the victim, otherwise they may never come out of the hypnotic trance. 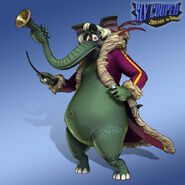 Miss Decibel as a child

Miss Decibel controlling people to do her crimes

Miss Decibel in jail, with her trumpet removed.

Concept art of an early, male version of Decibel

Miss Decibel as an Easter egg