The Moat Monster was a mini-boss in "Of Mice and Mechs" of Sly Cooper: Thieves in Time. The three-headed legendary beast was built by the Black Knight (Penelope) to guard her castle in Medieval England. Sir Galleth Cooper ventured into the lair of the dragon (where it was revealed to be a machine) to unplug the monster's plug from the socket. Although he unplugged it, the monster was awoken and swallowed him. A few seconds later, Carmelita Fox climbed the top of the tower to fight the Moat Monster and rescue Galleth.[1] Later, Bentley used what was left from the Moat Monster to build a robotic suit to defeat Penelope's "Black Knight" armor and rescue Sly Cooper from the debris that was squashing his leg.[2] 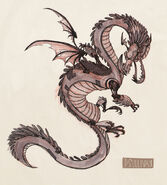