The Adventures of Sly Cooper Issue 1
Sly Cooper: To Catch a Thief

Mrs. Puffin was the headmistress of the Happy Camper Orphanage while Sly Cooper, Bentley and Murray resided there. She is a blue puffin with white hair who wore glasses that hung on a chain around her neck.

Mrs. Puffin enjoyed eating cookies and had a cookie jar in her office. Due to her rude demeanor, and due to stealing the Christmas cookies for the orphans, the young Cooper Gang decided to steal the jar in order to prevent her from finishing the remaining cookies; one of their first heists.

Mrs. Puffin never makes an appearance in any of the Sly Cooper games, but she is the victim of the Cooper Gang's first known heist in The Adventures of Sly Cooper Issue 1 and Sly Cooper: To Catch a Thief. Her cookie jar is a treasure in Sly Cooper: Thieves in Time. 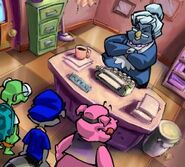 Mrs. Puffin scolding the young Cooper Gang for attempting to steal her cookies 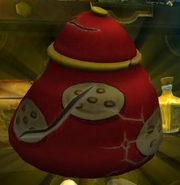 Mrs. Puffin's cookie jar in Thieves in Time
Add a photo to this gallery

Retrieved from "https://slycooper.fandom.com/wiki/Mrs._Puffin?oldid=138177"
Community content is available under CC-BY-SA unless otherwise noted.