Sly Cooper Wiki
Register
Don't have an account?
Sign In
Advertisement
in: Characters in Sly 3: Honor Among Thieves, Villains, Males,
and 3 more

"Mob of the Opera"

That's the toughest talk you got?! You're pathetic. Back in my day, we had enforcers that would make people pee their pants just as soon as look at 'em.
― Octavio to Sly Cooper, after the latter tries to threaten him[src]

Don Octavio[notes 1] is an opera singer and mob boss who planned to destroy many of Venice's landmarks as an attempt to gain attention for his opera, but the Cooper Gang intervened, and he is currently doing time in prison. He appears as the main antagonist in "An Opera of Fear" of Sly 3: Honor Among Thieves.

He was voiced by David Scully.

Growing up, this guy used to be a real celebrity in the neighborhood, everyone loved to hear him sing opera and said he was destined to be the next great tenor...
― Sly

As a young lion, Octavio became known for singing opera. He was a local celebrity in his neighborhood, where they loved to hear him sing. Many people said that he was destined to become the next great tenor. However, just when his career was beginning to take off, musical tastes changed to favor more modern genres, such as rock music, and nobody wanted to listen to opera anymore, much to Octavio's dismay. With his dreams of an opera-singing career gone,[notes 2] he was taken in by a group of fans who were members of a Mafia. Octavio eventually rose to the rank of Don within the Mala del Brenta.

Despite becoming a powerful Mafia boss, Octavio had big plans to restore opera in Venice. It took him six months to prepare his plans. With the help of an associate named Giovanni, he secretly began pumping tar into the canals of Venice. This devastated Venice's local wildlife and tourist trade. The Venetian police assigned Inspector Carmelita Fox and her group of mercenaries to the case, believing Octavio to be a prime suspect.

Surprisingly, the Guru also knew of the pollution in Venice and spoke of it to Murray, telling him not to return to Australia until "the black water ran pure." Sly Cooper and Bentley caught up with Murray and eventually realized that Octavio was indeed behind Venice's tar problem.

As Octavio went around pumping tar into the canals and landmarks of Venice, he was secretly being photographed by Sly, so the Cooper Gang would have evidence to have Octavio arrested. It was also during this job that Bentley destroyed Octavio's Ferris wheel, which was being used to pump tar into the canals. However, the effort to get the evidence to the police was futile as Octavio had men working undercover in the police and it was they who picked up the photos, which led to Octavio working out that the Cooper Gang was behind it.

Octavio made plans to take care of Carmelita, as she was trying to receive a warrant to search his opera house mansion which would be a critical blow to his operation. He hired the Blue Viper Gondola Gang to take her down, but Sly and Bentley caught wind of what was going to happen and saved her life by giving chase to the Blue Vipers and shooting their boats down one by one.

Though the Cooper Gang had thwarted some of his operations, Octavio's plan still neared its final stage and all he needed to do now was advertise his upcoming opera recital. Once the public showed up at it, he would then sink the buildings in Venice by detonating the tar-covered foundations until they agreed to his demands of loving opera again. The Cooper Gang attempted to take out his advertisements, which gave Octavio the chance to confront Bentley and capture him. Sly chased Octavio across Venice until Octavio, realizing he couldn't shake Sly off his tail, threw Bentley at him, then fled into his opera house mansion.

The Cooper Gang stepped up their plans to thwart Octavio. They managed to steal Octavio's tar pump blueprints, which were all hidden behind paintings in three of his coffee houses, by fooling the guards with a disguise. Aware that his normal patrol wasn't enough, Octavio hired the Vincenetti Clan, who had powerful Soldatos equipped with jet-packs and missile launchers. However, Sly and Bentley managed to manipulate Carmelita and her mercenaries into taking them all out. Bentley also convinced Murray to take to the field and take out some of Octavio's tar pumps.

When the day of the opera recital arrived, Octavio was tricked by a disguised Sly into letting him access the main tar pump room, which led to Sly and Bentley destroying all of the tar pumps; this ultimately did not matter as Octavio had already pumped out enough tar to start sinking buildings. Octavio then took to the stage, but no one had shown up at the opera recital other than Bentley, who then challenged Octavio to a "sing-off." The sing-off was just a ploy to swipe the demolition control switch out of Octavio's hand, whilst Sly would drop the stage's chandelier onto Octavio's head.

During the sing-off, Octavio would move closer and closer to Bentley in an attempt to kill him. When the sing-off ended, Bentley shouted for Sly to drop the chandelier as Octavio stood in a state of shock. However, Carmelita destroyed the chandelier using her shock blaster before it landed on him and informed Sly, Bentley, and him that they were under arrest. Then, one of Octavio's underlings pulled up in a gondola and Octavio quickly jumped in and escaped. Sly and Bentley jumped into a hot-wired gondola to chase him.

As the chase led into the canals of Venice, Octavio began to bomb the waters, in an attempt to shake off Sly and Bentley's gondola. Eventually, Octavio's gondola engine was shot down, leading to the gondola crashing into and destroying the stage, killing his underling. Sly and Bentley pulled up on the bank next to it and confronted Octavio, telling him to hand over the demolition switch and then they'd all ditch the cops. Octavio was about to comply, but when Murray, who was watching from a nearby rooftop, exclaimed that it was "so cool" that Octavio's gondola crashed into the opera stage, Octavio pressed the switch and sank a building.

Bentley, infuriated by this, called Octavio a monster, only to receive a flying kick for his troubles, which knocked him out of his wheelchair and onto the pavement. Sly backed up and asked Murray for help in defeating Octavio. Murray was initially reluctant as he wished to abide by the Guru's teachings, but when Octavio taunted him as Bentley weakly asked for help, an angry Murray leaped into battle, fists blazing, with the help of Sly, who used the town's tar valves to slow down Octavio's attacks. Despite putting up a really good fight, the mob boss was eventually forced to admit defeat at the hands of the rotund hippopotamus after suffering too many punches. Sly and Murray then left a knocked-out Octavio for the police to deal with as they went back to retrieve Bentley.

After being arrested by Carmelita, Octavio was sentenced to thirty years in jail for the damage he caused to Venice. Ironically, it would be there that he would find success as a singer, given that most of his old fan base was already in jail along with him.

Octavio cameos in the third part of the opening cutscene to Sly Cooper: Thieves in Time. As Sly mentions how he, Bentley, and Murray became an unbeatable team, the accompanying image has Murray getting Octavio in a headlock, arm reared back for a punch. Strangely enough, Octavio's design here is based on his beta design from Sly 3 rather than the final one.

Octavio is a lion with a black hat and cape-like garment, red and black boots, and purple shirt and pants with white stripes. He has a white mask fitted on his face. He also has yellow hair and beard and brown fur.

Octavio, like most crime bosses, is cold, calculating and ruthless. He was willing to sink entire buildings just to make people listen to his opera. He also seemingly has no respect for others, kidnapping and later kicking Bentley, trying to have Carmelita killed, taunting Murray into fighting, announcing that three of his own boys would be "whacked" for not meeting expectations and ordering the other guards to "shoot them in the back" if they caught them trying to escape. Fortunately for the two that did not try to run away, the Carnevale season made Octavio rather "charitable," so he let the two guards off the hook.[1] Octavio also has a somewhat arrogant side, mocking Sly after the raccoon threatened dire consequences if he did not let Bentley go.[2] However, the crime boss had a kinder side, although he very rarely let it show. When met by a disguised Sly just before his recital, who commented that he was "looking forward to the performance," Octavio was more than happy to aid him in opening the double button security door leading to the main pump room, saying "For a fellow music lover, it would be a pleasure."[3]

Octavio is a master vocalist, even managing to manipulate the sound waves into a form of attack. He is shown to be a skilled fighter, an expert at hand-to-hand combat with enough strength to hold his own against Murray. Possibly the most remarkable ability in his old age is his speed and agility, as he is able to scale buildings with ease, turn backflips, and is so fast that he had to be walking in tar in order for Murray to land hits on him. 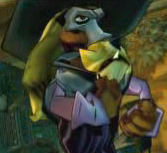 Octavio's cameo in Thieves in Time

An early version of Octavio 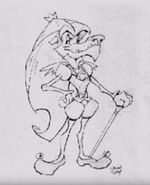 An early design of Octavio

In the Japanese versions, Octavio's voice is provided by Kazuhiro Yamaji.