The paraglider is a purchasable parachute that allows Sly Cooper to glide through the air. It appears in Sly 2: Band of Thieves, Sly 3: Honor Among Thieves and Sly Cooper: Thieves in Time. It is opened by holding

Sly 2: Band of Thieves and Sly 3: Honor Among Thieves[]

In Sly 2 and Sly 3, the paraglider was purchasable through ThiefNet ("A Tangled Web" in Sly 2, and day two of "Rumble Down Under" in Sly 3). The paraglider was required for certain jobs throughout the game, so buying it was crucial, similar to the need to buy the Alarm Clock, Hover Pack and Grapple-Cam. Sly could control the paraglider by using

to change direction and speed. After releasing

, the paraglider breaks up into paper-like scraps.

Neyla also had a paraglider, and used it during "Operation: High Road" as Sly chased her.

The paraglider can be purchased in the first episode, "Turning Japanese," for 100 coins, much earlier and for far cheaper than in the previous games.

The paraglider looks very similar to the original version, but rather than being flat and having a pointed elliptical shape, it has both an upper and lower surface, spanned by "ribs," and has flat sides, giving it a look more closely related to its real world counterpart.

One visual difference in the way the paraglider behaves is, rather than breaking up into small paper-like scraps after the player releases

, it floats up into the air and fades away.

At the end of the game, Cyrille Le Paradox steals Sly's backpack, and therefore all of his paragliders, and uses them to escape his burning blimp, but is immediately hit by the vertical stabilizer of what appears to be a Learjet, causing him to release the paraglider and drop to the water below.

Salim al-Kupar has a variant of the paraglider in the form of magic flying carpet. It is activated by holding

The following is based on non-canon content and is not considered to be part of the Sly Cooper continuity.

In PlayStation All-Stars Battle Royale, Sly could use the paraglider by holding down

while in the air, rather than

. This is helpful to evade enemy attacks that are horizontal on the ground. 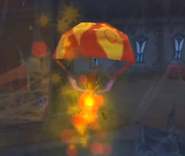 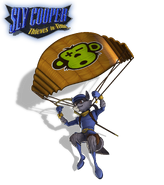 Monkey Paraglider in Thieves in Time 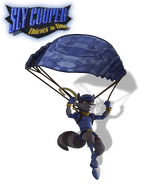