Sly Cooper Wiki
Register
Don't have an account?
Sign In
Advertisement
in: Power-ups for Sly Cooper, Power-ups in Sly 3: Honor Among Thieves

Sly Cooper
The photographer disguise was a disguise in Sly 3: Honor Among Thieves that Sly Cooper could use in "A Cold Alliance." This disguise would fool the guards of China, but not Carmelita Fox. It was acquired in the mission, "Get a Job."

While in disguise, if you get within a Chinese guard's line of sight, you will be asked to stop and provide one of several specific passwords. When this happens, Bentley will feed you the code via radio; this will visually show up in a broadcast bubble along with a combination of four face button icons. The four-word code disappears a second or two after the complete code is revealed. You are then required to input the password within a few seconds. If it's inputted quickly and without error, the guard will recognize you as one of their own. If you press the wrong button at any point or take too long to give the password, the guard will expose you as a fake and attack you, reverting Sly to his default attire. If you are caught, you cannot attempt to fool any Chinese guards until you are no longer in combat.

While in disguise, your physical actions are limited to walking and a very short jump.

This disguise was used in the mission, "Get a Job." This was the only time in the game Sly could take photos using the disguise. First, Bentley had to dress up in a disguise and attempt to get hired as the wedding coordinator, which Tsao had no need for. He then scored Sly the job as the wedding photographer. Sly had to don the photographer disguise and take three photos of Tsao's guards. Once done, he had to head inside the palace and show Tsao his work. Tsao appreciated his keen sense of "compositional regularity" and "forced perspectivism." He gave Sly the honor of photographing the wedding. However, Tsao was able to see through Sly's disguise and knew it was him all along. 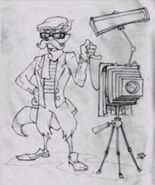 Power-ups in Sly 3: Honor Among Thieves
Community content is available under CC-BY-SA unless otherwise noted.
Advertisement