Medieval England
Porcupines were enemy guards faced by Sly Cooper and the gang in Of Mice and Mechs of Sly Cooper: Thieves in Time. They served as rooftop guards.

They are brown in color without any clothes and carry a large extendable mace. They will swing this mace above their heads, which will extend the mace a reasonably long distance. They throw rocks at the player from long distance and will occasionally dodge attacks. 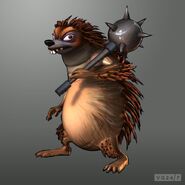 Concept art of a porcupine guard.

Concept art showing the guard with a sword and shield.
Add a photo to this gallery

Guards in Sly Cooper: Thieves in Time
Retrieved from "https://slycooper.fandom.com/wiki/Porcupine_guard?oldid=142908"
Community content is available under CC-BY-SA unless otherwise noted.