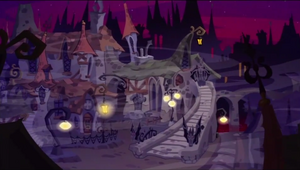 Prague is the capital of the Czech Republic and served as the main base of operations for the Contessa in "Jailbreak" and "A Tangled Web" of Sly 2: Band of Thieves.

Both Prague locations in the game are distinctly Gothic, involving gargoyles, blood red skies and crypts. There are also spider webs serving as trampolines to get up onto the rooftops.

When Neyla betrayed the Cooper Gang and Carmelita,[1] Sly Cooper, Murray and Carmelita were arrested and sent to the prison. It was up to Bentley to drive to Prague and free his pals.

First, he established a safe house, then helped Sly escape from "the hole". After Sly was freed, he and Bentley now had to work on freeing Murray. They first planned to have him transferred from Cell Block D to solitary confinement in order for them to have a better chance of freeing him.[2] Next, they pulled off a wide range of jobs, which involved bombing the bridge to power down the prison's security, taking photos of encryption algorithm codes, stealing keys and a tank schedule from the Contessa and using lightning rods to destroy the prison's giant attack robot.

After this, they stormed the prison to free Murray. When they found him, they were shocked to see him in a twitchy manner. This was because Murray had been forced to eat meals covered in spice by the Contessa, making him susceptible to hypnosis and go into a state of rage. Once Sly and Bentley broke Murray out of his spice rage by destroying the prison's hypno-boxes, he, Sly and Bentley spotted the Contessa and chased after her on the walls of the prison. She managed to escape them on a getaway blimp, much to Murray's discontent.[3]

Despite the Contessa's escape, the gang was overjoyed to be reunited and it was all thanks to Bentley. They took some time off before returning to work.

After the Contessa fled from her prison, the gang followed her to her castle estate. She has taken possession of the Clockwerk eyes and was using them to hypnotize Carmelita, in order to turn her into her "friend". The gang had to work on a plan to free Carmelita and steal the Clockwerk eyes.

Also, Neyla was assigned by Interpol to arrest the Contessa, and was given a cash allowance to hire her own private army of tanks and bomber planes to use against the Contessa's army.

After freeing Carmelita and the Clockwerk eyes, Carmelita chased the Contessa out of her mansion, with the intent of arresting her. After losing her, Carmelita took one of the eyes and tried to escape in a tank, but she was stopped by Murray. The Contessa confronted Sly, who had another eye on his back. Sly defeated her in two matches, and reclaimed the eye.[4]

Once the Contessa was defeated, she was arrested and Neyla was promoted to Captain. As cops were closing in, Sly had to help Carmelita escape from them, as she was still on the outs with Interpol. With the Klaww Gang business spiraling out of control, and with the gang being in the center of it, they decided to lay low for a while.[5]

Sly 2: Band of Thieves
Retrieved from "https://slycooper.fandom.com/wiki/Prague?oldid=128343"
Community content is available under CC-BY-SA unless otherwise noted.