Sly Cooper Wiki
Register
Don't have an account?
Sign In
Advertisement
in: Guards in The Cold Heart of Hate

Krakarov Volcano
Robo-falcons were robotic minions created by Clockwerk to protect his lair in the Krakarov Volcano in "The Cold Heart of Hate" of Sly Cooper and the Thievius Raccoonus.

They had golden armor and blue eyes, and were the main security force protecting Clockwerk's fortress. Upon entering Krakarov, Sly Cooper and the gang were attacked by groups of these falcons, which would swarm around the van and inflict severe damage to Sly. He used their new turret, courtesy of Otto van Cooper, to dispatch them. 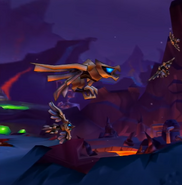