Roger that, just call me "Samurai Sly."
― Sly to Bentley[src]

The Samurai Costume is a costume in Sly Cooper: Thieves in Time that is acquired in Feudal Japan. It is obtained by pickpocketing three different pieces of the suit of armor from three different guards, namely the Helmet, Leggings, and Chestplate. It is required to enter the Imperial Prison, where Rioichi Cooper is being held captive.

Forged long ago for a great general, this heavy armor was made to "battle even demon enemies." Its unique construction withstands the fiercest flames, while its shield can reflect fireballs!
― In-game description[src]

The Samurai Costume consists of many different parts. Sly wears a kabuto (a traditional samurai helmet) on his head with decorations called fukikaeshi attached to the side. On the front of the helmet is a headpiece (consisting of a maedate and mabizashi), which obstructs most of Sly's face. He wears vambraces and large spaulders on his arms; his standard gloves can be seen under the vambraces. Worn on his torso is the standard breastplate worn by samurais, with faulds hanging from the bottom along with a white sash wrapped around his waist. An unusable katana is sheathed on his left hip. Sly does not receive any greaves with this costume, he still wears his blue boots instead. Due to the armor being designed for users of a larger build, the costume looks oversized and bulky, causing Sly to walk awkwardly while wearing it.

Due to the weight and large size of the armor, Sly cannot run, jump, or perform any acrobatic moves while wearing this costume. While the shield can be used to attack, it has poor range, making it ineffective in close combat despite its decent attack power. 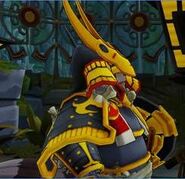 Sly in the Samurai Costume.

A set of samurai armor in Rioichi's section of the Cooper Vault. Whether this is the same armor is unknown.