A security system is a system designed to detect unauthorized intrusion into a building or area. They are found throughout the Sly Cooper series. They consist of searchlights that can burn or shoot the perpetrator, lasers that can sound alarms or burn the perpetrator and electrical floors that can electrocute the perpetrator instantly.

Every episode in this game features a security system that consists of spotlights, moving or stationary lasers and electrical floor lasers. If Sly gets spotted by a searchlight, touch lasers and electrical lasers while they are yellow, he is not harmed right away, but it will trigger the alarm, and they will all turn red and become dangerous, plus they can cause instant death. Smashing the alarm deactivates the security system.

Just like in the last game, each episode features some type of security system. However, these systems are no longer connected to an alarm, so there is often no way of deactivating them. This includes moving floor lasers, spotlights, laser grids and force-fields. The spotlights will shoot Sly if he is seen and lasers will burn right away instead of turning a different color first. Lasers also come in a variety of colors such as yellow, red and light blue. Some areas have laser grids that leave no space to go around and must be deactivated through other means such as taking out guards, destroying power boxes or hacking computers.

This game shares most of the same security systems seen in Sly 2. There is the addition of the electric floor seen in the Black Baron's air hangar in Flight of Fancy. In A Cold Alliance, General Tsao uses vases as an ancient Chinese security technique to detect underground thieves. Any vase that tips over would trip an alarm. During "Operation: Wedding Crasher," Sly had to prevent any of them from falling while the Panda King and the Guru travel beneath the palace to free Jing King, blasting their way through with fireworks. Tsao also installed a security system in his treasure temple that employed motion-detecting nodes connected to the floor.

Each boss in the game uses green laser grids that were manufactured by Cyrille Le Paradox. Touching these causes instant death. They have to be deactivated by pressing or shooting a switch. Spotlights and lasers return and, upon contact, cause instant death by electrocution and burning, respectively.

Rioichi getting caught by a spotlight 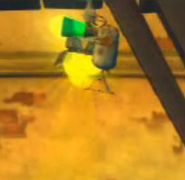 Side view of a spotlight

Side view of a spotlight

Lasers and a security grid