This article is about the weapon used by members of INTERPOL. For the prize found in Bentley's Hackpack, see Shock Pistol (prize).

This pistol packs a paralyzing punch. You ought to try it; might snap you out of your crime spree.
― Carmelita to Sly[src]

The shock pistol was a firearm issued to members of INTERPOL,[1] though Inspector Carmelita Fox is the only one seen utilizing it. She uses it in all four games of the Sly Cooper series.

The shock pistol is a weapon that was designed to fire electric projectiles meant to stun a target. While Carmelita is the only one seen using the shock pistol, it is INTERPOL-issued,[1] and therefore is likely used by other agents as well. It is very potent, able to take down a criminal as large and durable as Muggshot, as seen in Sly 3: Honor Among Thieves,[2] and destroy inanimate objects as large as a police car, as seen in Sly Cooper and the Thievius Raccoonus.[3]

Carmelita is seen carrying it with her at all times for offensive and defensive purposes. It has an attached flashlight on it that beams white light, as opposed to the standard flashlight guards' lights, which are yellow.

In Sly Cooper and the Thievius Raccoonus, similar to other weapons used by standard enemies, the shock pistol is able to defeat Sly Cooper in a single shot.

In Sly 2: Band of Thieves, due to the addition of the Thief Meter, the shock pistol is very similar to the weapons used by flashlight guards. It does 25% damage per hit.

In Sly 3: Honor Among Thieves, the shock pistol can be used by the player during gameplay as Carmelita by pressing

. It must be aimed with

creates a large reticle that causes the shots to home in on its targets, requiring less precision. It is the only weapon to be used by a main protagonist within the games in such a manner, as Carmelita's melee attack has an incredibly short range and is somewhat unreliable in comparison to the shock pistol. The version of the shock pistol was retired following the events of Sly 3, but was put back into use by the events of the fourth game.[1]

In Sly Cooper: Thieves in Time, the shock pistol is very similar to its Sly 2 and Sly 3 counterpart, save for the different rates of fire and effects, which include, but aren't limited to; triple shot, charge shot, and rapid fire. Carmelita uses her shock pistol to hit enemies, rather than kicking them as in Sly 2 and Sly 3.

In Bentley's Hackpack, the Shock Pistol appeared as a prize. 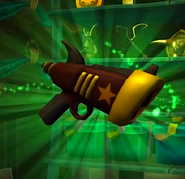 Shock Pistol as a prize in Bentley's Hackpack

Add a photo to this gallery

Gameplay
Retrieved from "https://slycooper.fandom.com/wiki/Shock_pistol?oldid=142213"
Community content is available under CC-BY-SA unless otherwise noted.