Arabian city
Siamese cats are a type of rooftop guard in "40 Thieves" of Sly Cooper: Thieves in Time.

The Siamese cats have grayish-brown and dark brown/black fur and wear a cyan bedlah, complete with an ornated top, indicating that they are female. Around their waist they have a green and red "belt," along with various golden jewelry on their ankles, wrists and top. On their head, they wear a red ornated tiara. They wield two large scimitars that break off their blades to attack the Cooper Gang at long range. If the gang tries to escape them, they can be seen running for a short time on all fours to reach their enemies, and when the player tries to attack these guards, they occasionally dodge their attacks. Also, if the player is far away, they throw rocks at them. 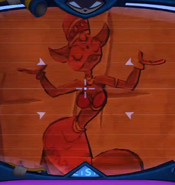 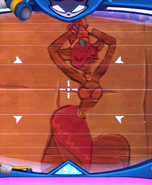 Headshot of a Siamese cat as she appears on the official Sly Cooper website.

A screenshot featuring an early version of Sly and a Siamese cat.

Guards in Sly Cooper: Thieves in Time
Community content is available under CC-BY-SA unless otherwise noted.