Edit
This article is about the cane that belonged to Conner and Sly Cooper. For an overview of all canes, see cane.

Sly Cooper and the Thievius Raccoonus
Sly 2: Band of Thieves
Sly 3: Honor Among Thieves
Sly Cooper: Thieves in Time
The Adventures of Sly Cooper
Sly Cooper: To Catch a Thief (cover)
A cane owned by Sly Cooper after it was passed down to him by his father, Conner Cooper, following his death; it is his signature weapon from the Sly Cooper series. It consists of a yellow hook in the shape of a "C" or a "?" on top of a brown staff.[1][note 1]

The famous C-shaped hook has been part of many weapons from the Cooper family line. Sly's cane and other Cooper canes have the ability to open the Cooper Vault.[2] This cane had originally belonged to his father, before the latter was murdered by the Fiendish Five. Sly has had it in his possession ever since.

Towards the end of Sly Cooper and the Thievius Raccoonus, a robo-falcon stole the cane from Sly[3], who later retrieved it with help from Carmelita, who had just formed a temporary truce with Sly in order to defeat Clockwerk.

In Sly 3: Honor Among Thieves, the cane was thrown across Kaine Island during a fight with one of Dr. M's mutated monsters.[4] The gang did numerous jobs to get it back to Sly[5][6][7][8] so he could open the vault. Afterward, Sly faked amnesia so that he could start a relationship with Carmelita[9], then left the cane behind along with a calling card for the rest of the gang to find.[10]

In Sly Cooper: Thieves in Time, it was revealed that Bentley kept the cane safe for Sly, and returned it to him when they reunited.[11] Sly had the cane with him throughout the game.[12][13]

The cane serves as multipurpose tool that allows Sly to pick pockets[14], lock-pick[15], swing from hooks[16], latch onto and launch from wall hooks[17] and strike enemies. Although it has a sharp point, the cane still acts efficiently as a blunt weapon. It can be charged up for a powerful melee strike and upgraded with gadgets bought from ThiefNet.[18][19][12] Such gadgets include a smoke bomb and other powerful stealth attacks. Bentley once upgraded the cane in Sly 2: Band of Thieves to be able to split into two separate canes so that Sly could climb difficult ice walls in Jean Bison's lumber camp.[20]

In The Adventures of Sly Cooper Issue 2, Sly sneaks his cane into Heathrow Penitentiary by disguising it as a prison guard stick.[21] Later in the comic, he extends the hook to pick a lock.[15] The cane has only done this in the comic.

When developing Sly's weapon, Sucker Punch put a question mark as a temporary placeholder. However, the developers realized that it "kinda looked cool," and the question mark was similar to a "C" for Cooper, so they kept the general shape.

The cane initially had many more functions, such as being able to transform into different weapons, but sometime during development of the first game, these abilities were cut.[1]

In April 2012, Scott Rohde (Software Product Development Head for Sony Worldwide Studios America and Sony Computer Entertainment America) posted a picture of a replica of Sly's cane on Twitter. This picture led many fans to believe that a Collector's Edition of Sly Cooper: Thieves in Time, or this very replica itself, would become available. Neither turned out to be true; the replica does exist, but it is not available for purchase.

The replica measures 37 inches in length. The stick is made out of wood, while the tip at the bottom and the crook are made out of bronze and tinted gold. The bronze increases the weight of the cane, so it cannot be swung easily. The replica also comes with a stand, the top of which is covered in foam to protect the cane. The stand displays Sly's mask in the front.

The cane has remained practically unchanged throughout the games. 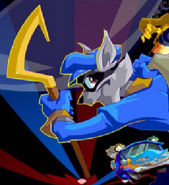 As seen in Sly Cooper and the Thievius Raccoonus. 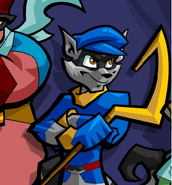 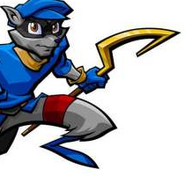