Sly Cooper Wiki
Register
Don't have an account?
Sign In
Advertisement
in: Bonus videos from Sly 2: Band of Thieves

Sly Cooper: The Second Season is a short bonus video in Sly 2: Band of Thieves. It follows the Cooper Gang's theft of a rare stamp from a Parisian museum.

The video is unlocked by completing "The Black Chateau" and accessed by hovering over the episode in the episode select screen. After a few seconds of waiting, a police badge will appear, prompting the player to press

The video begins outside a museum that is set to open an exhibit showcasing rare stamps of the world. The shot transitions to the inside of the building, revealing a room with wall-to-wall laser security. At the far end of the room is a stamp with the "$" symbol on it.

Sly Cooper is seen on the roof cutting a circular hole in the skylight, catching the glass piece that falls in with his cane. He then jumps inside the room and bounds easily around the laser security. Smashing the glass case of the stamp, he replaces it with the glass piece. This bounces the lasers around the room, forming his signature insignia, making for a more unique approach to his leaving of a standard calling card.

Sly then jumps into the van and takes off, but it isn't long before Inspector Carmelita Fox begins chasing the gang in her car. Bentley flicks a switch and a bridge down the road raises. Murray, terrified, then speeds over the bridge and jumps the gap. Carmelita skids to a stop before the gap and angrily slams her fist.

Later that night, Carmelita enters her office to find a postcard that reads "Better luck next time" along with the rare stamp, now postmarked, on the back of the card. 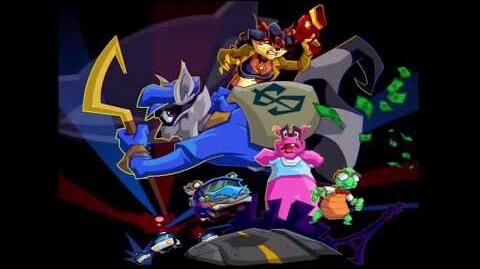