The following is based on cut or altered content and is not considered to be part of the Sly Cooper continuity.

This is a list of content that was either removed or altered in the final version of Sly Cooper: Thieves in Time. 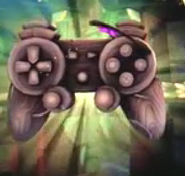 The Classic Gaming Gear
Add a photo to this gallery