I thought I'd finished it.
This page needs to be expanded in order to include more relevant information.
This article is about the Japanese manga, transliterated to be "Kaitou Sly Cooper". For the game with this name, see Sly Cooper and the Thievius Raccoonus.

Phantom Thief Sly Cooper (怪盗スライ・クーパー, Kaitō Surai Kūpā) is a Japan-exclusive manga that was written and illustrated by Shoji Imaki. It appeared in Comic BomBom monthly between January and September of 2005. It acted as promotional material for the then-unreleased (in Japan) Kaitou Sly Cooper 2.

Japan was a country secretly governed by a group of ninjas. Their leader, Hattori Hatzo, possessed the Black Bean Shiny Armor. When Hattori received word that intruders were in his castle, he suspected that they had come to steal his treasure. He wondered how the intruders would fare against the castle's "Barriers of Terror."

The intruders, who turned out to be the Cooper Gang, were faced with the first Barrier of Terror: the Dosukoi Fighters. Murray defeated the sumo fighters easily. Next was the Terror Thorn Drop, which supposedly consisted of a trapdoor that dropped intruders onto a bed of spikes. In reality, the overly-long spikes prevented the trapdoor from opening, allowing the Cooper Gang to progress further into the castle. To Hattori's surprise the third barrier, the Ceiling Tub Drop, subdued the intruders. Hattori planned to boil them alive in a giant pot, starting with Sly.

As a final request, Sly asked the ninjas to put laundry detergent in the pot. Unbeknownst to them, this allowed him to escape, and he subsequently defeated Hattori's entire army. Sly then bested Hattori himself in a sword-fight, and the ninja surrendered his treasure to the thief. Sly was eager to try on the Black Bean Shiny Armor, only to find out that it was the size of his palm. Upon being asked about this, Hattori demonstrated the armor's purpose by putting it on one of his dolls.

Elsewhere, Carmelita Fox was preparing to leave for Japan when she was informed that Sly had already returned home.

In Egypt, Sly and Bentley searched a pyramid for the Book of the Dead, an item described as being "a manual for the afterlife." Just as Bentley was overcome with a sense of foreboding, the ceiling collapsed on him and Sly. The pair woke up some time later and, seeing the halos above their heads, realized that they had died. Just then, a woman appeared. Sly mistook her for Carmelita, but the woman claimed to be Anubis, guardian of the tomb. She restrained Sly and Bentley and took them to the Chamber of Truth, where they were to receive judgement from Oniris, king of the underworld.

The duo arrived at the chamber and were presented to Oniris. The king asked Sly a series of questions, and the jury then presented their verdict: guilty. The king sentenced Sly to be devoured by the monster god Ammit and sent to Hell. With Bentley's help, Sly was able to overcome the monster.

Oniris restrained Sly and Bentley, refusing to let them leave. Just then, Murray appeared. He claimed to be Taweret, the goddess of regeneration, and convinced Oniris to revive his friends. Sly and Bentley woke up back at the pyramid. Anubis was there too, having grown infatuated with Sly after watching his battle with Ammit. As Sly ran away from Anubis, the real Carmelita showed up and gave chase as well. Meanwhile, Murray remained in the underworld, being worshiped as a goddess.

Sly recounted the story of one of his ancestors, Leo Cooper. Leo had sneaked onboard the luxury cruiser Daikanic and fell in love with a woman. As a token of her love, the woman gave him a priceless heirloom called the Brian Egg. However, the ship later sunk to the bottom of the sea, taking the egg with it.

To search for the artifact, Bentley constructed the King Crab 2000, a submarine capable of diving to the ocean floor. The team entered the submarine and submerged. They found the shipwreck and were able to retrieve the Brian Egg. However, they were forced to make a hasty retreat when the submarine began to crush under the intense pressure of the ocean. A giant octopus inadvertently saved them when it attacked and pushed the submarine to the surface.

Back on their boat, the joy of being alive was short-lived when the Navy Captain Otto appeared. Otto held the Gang at gunpoint and demanded that Sly give him the Brian Egg. Sly did so and was thrown overboard along with Bentley and Murray. Using the emergency laundry detergent kept in his hat, Sly summoned the giant octopus to defeat Otto's crew. He retrieved the egg but was left puzzled, as it appeared to require a password to open.

Carmelita arrived in a helicopter and claimed to know the password. This was because the egg originally belonged to her ancestor Almalita, who had it stolen from her by Leo Cooper. Carmelita entered the password, and the egg hatched. TOM emerged singing and dancing, and both Sly and Carmelita were underwhelmed by the reality of the egg. Suddenly, TOM self-destructed, resulting in a large explosion.

Sly, Bentley and Murray as they appear in the manga

Carmelita Fox as she appears in the manga 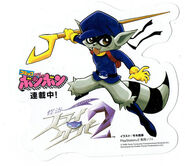 Promotional material for Kaitou Sly Cooper 2, featuring Sly as he appears in the manga
Add a photo to this gallery
Sly Cooper series
Retrieved from "https://slycooper.fandom.com/wiki/Sly_Cooper_(manga)?oldid=133866"
Community content is available under CC-BY-SA unless otherwise noted.