We are a community-maintained Sly Cooper resource that
currently hosts 1,287 pages and 4,566 images and videos.
Anyone is free to help us improve. Please make sure you have read the
rules and guidelines before contributing.
WARNING: THIS WIKI CONTAINS UNMARKED SPOILERS.

Sly Cooper is a media franchise that follows the adventures of eponymous protagonist Sly Cooper, a young adult raccoon and the latest descendant in a line of master thieves. While the Cooper family has accumulated a massive amount of wealth through their thieving ways, Sly places greater value on his friendship with his partners, Bentley and Murray, and his flirtatious relationship with Inspector Carmelita Fox.

The franchise began as a video game series, with its most recent entry, Thieves in Time, being released in 2013. Since its inception, Sly Cooper has expanded to include comics, a novel and both an upcoming television series and upcoming film. 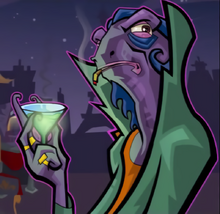 Dimitri Lousteau is a purple marine iguana that was at one time a professional lounge lizard and international forger. Once a passionate art student, he began a life of crime after incurring harsh feedback from art critics. Eventually joining the Klaww Gang, Dimitri used his nightclub in Paris as a way to feed illegal spice to the population, in addition to a cover for his forgery scheme.

After the fall of the Klaww Gang and his incarceration, Dimitri sought the help of the Cooper Gang in recovering his grandfather's treasured diving gear. In return, he joined them for the Cooper Vault heist. (read more...)

Did you know…
(Suggest trivia · Refresh)
How to help

This wiki is a collaborative website built by its users. We hope you too will stick around and help us become the best resource for all things Sly Cooper. Not sure where to start?

TV series
August 2021
There is no news on the TV series.