The following is based on cut or altered content and is not considered to be part of the Sly Cooper continuity.

The following is a list of content that was either removed or altered in the final release of Sly Cooper and the Thievius Raccoonus.

Fire in the Sky[edit | edit source]

Highlighted by the blue "thief sense" auras, Sly Cooper sneaks along a wall to avoid detection

Sly hiding from the squid guard

Sly hanging on top of a huge light

Sly protecting himself with a barrel

A Rocky Start with a different skybox

Earlier version of "Two to Tango" had different chandeliers

At the bottom, you can see that the barrel was going to be used 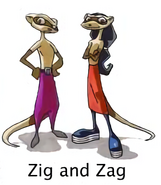 Concept art of Zig and Zag

Sly Cooper and the Thievius Raccoonus
Retrieved from "https://slycooper.fandom.com/wiki/Sly_Cooper_and_the_Thievius_Raccoonus/Altered_content?oldid=144400"
Community content is available under CC-BY-SA unless otherwise noted.