Sly Cooper Wiki
Register
Don't have an account?
Sign In
Advertisement
in: Locations in Sly 2: Band of Thieves

Somehow he had managed to transform a long-forgotten temple into the thriving center of his spice operation and it's there where we'll find him.
― Sly Cooper talking about Rajan

The spice temple was a long-forgotten temple in an Indian jungle that was transformed into a spice production facility by Klaww Gang member, Rajan. By utilizing the restless pump that was the Clockwerk heart he was able to increase production tenfold.

Rajan fled deep into the jungle after the theft of the Clockwerk wings which left his reputation in shambles.[1] He found refuge in the old temple, quickly transforming it into a spice production facility and making use of Clockwerk's heart to accelerate the growth of his spice plants.[2]

The Cooper Gang tracked down Rajan and set up a safe house near the temple. Learning of Rajan's use of the heart, they worked to learn more about his operation. Inadvertently, they spooked Rajan and drove him into hiding when they stole his blueprints from right under his nose.[3] In an attempt to drive him out, the Gang destroyed his spice grinder, effectively halting spice production.[4] However, Rajan remained in hiding. So, the Gang flooded the entire temple with the use of TNT explosives and finally managed to make the spice lord come out of hiding.[5]

With Rajan's arrest and the subsequent fall of the Klaww Gang the temple was presumably abandoned.

The Spice Temple and the surrounding jungle consist of various locations:

The growing facility was one of the main parts of the temple where Rajan's spices grew strong thanks to the energy emitted by one half of the Clockwerk heart. The facility was filled with water, which helped to keep the spices fresh.[2] Once grown, the plants were ground with the spice grinder.[4] Sly Cooper later stole the half of Clockwerk's heart that was powering the facility, leaving Rajan furious.[6]

Lower level of the facility.

Higher level of the facility.

This underground facility was where the spice plants were ground into powder before being sold. It was heavily guarded by Rhino guards and security systems, including spotlights and laser fences. Sly used a barrel of TNT to blow up the central mechanism grinding the spices, completely sabotaging Rajan's spice operation and leaving the tiger enraged. 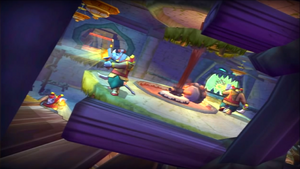 Rajan's office was entered via a secret passageway on the upper levels of the temple, heavily guarded with a laser floor. During the mission, "Water Bug Run", Sly stashed a bug in the office allowing Bentley to eavesdrop on Rajan's conversations. It also contained the vault, which would give Sly the Voltage Attack move. 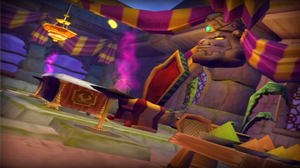 An ancient tower structure that Bentley crashed into with a helicopter during "Blow the Dam". The helicopter remained on top of the tower, allowing Bentley to gain access to its turret afterwards.

Sly 2: Band of Thieves
Community content is available under CC-BY-SA unless otherwise noted.