Sly Cooper: Thieves in Time
Bentley's Hackpack
System Cracker was one of three hacking minigames from Sly Cooper: Thieves in Time and Bentley's Hackpack, and the most basic. Along with Alter Ego and Spark Runner, it was used to hack into adversarial systems in order to gain information or interfere with operations. At its most basic, it is the same as the hacking from Sly 2: Band of Thieves and Sly 3: Honor Among Thieves, though it has the addition of new avatars to hack with; the basic Shell Code, the powerful Panzer Code and the fast Speeder Code.

In Thieves in Time, Bentley uses hacking to gain access to information from within various computer systems, as well as crippling them, by shutting down the systems. It can be done remotely from the hideout, by having Sly Cooper or others place a remote hacking device onto the computer that requires hacking, or it can be done by accessing the computer itself.

The minigames are all used as challenges in the arcade cabinets that appear in each hideout after collecting all of the treasures in that episode. The high scores must all be beaten in order to gain both the "Child of the 80's" and "8-Bit Bentley Style" trophies.

Bentley's Hackpack turned System Cracker, Alter Ego and Spark Runner into arcade machines, each with multiple maps and challenges associated with each map. Completing challenges allows Bentley to collect tokens, which in turn unlock prizes from the Prize Gallery.

The Shell Code is the basic avatar in System Cracker. It has a moderate travel speed and deals moderate damage. It is the only avatar that can pick up keys and unlock locks. The Shell Code is a dark green vehicle with a light green outline. It is shaped like a turtle and has a cannon on top of it. 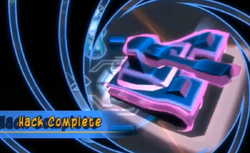 Named after the massive German tanks, the Panzer Code is the strongest, but also the slowest, of the three avatars. It has an artillery weapon called the Giga Bomb that can easily destroy pink crystalline barriers in three hits and enemies and firewalls in one hit. When in this form, the fire rate is significantly slower compared to the other avatars; in Bentley's Hackpack, however, obtaining a speed power-up enables the Panzer Code shoot as quickly as the Shell Code.

The Panzer Code is a blue tank with a pink outline. It has treads on either side and a large cannon, called the bit cannon, on top. When firing, a pink targeting symbol appears on the ground, and the giga-bombs that are fired from it hit the target directly. The Panzer Code, with its pink color, powerful attacks, and slow movement, is based on Murray's characteristics.

The Speeder Code is the fastest-moving avatar. It has about the same fire date and damage as the Shell Code, but its bullets can ricochet off walls and hit enemies and objects that are not within the direct line of fire. This avatar also has the ability to generate a laser which, coupled with speed, allows it to quickly circle groups of enemies and trap them within the loop. The laser loop is also the only attack that can destroy the blue switches found in some hacks. The Speeder Code, with its blue color and speed, is based on Sly Cooper's characteristics.