Sly Cooper Wiki
Register
Don't have an account?
Sign In
Advertisement
in: Cooper Clan, Deceased, Males, Characters in The Adventures of Sly Cooper

Cane with a ruby on the end

Victorian London was the stomping ground for the most gentlemanly thief, Thaddeus Winslow Cooper.
― Sly in the Cooper Vault, remarking on Thaddeus' exploits[src]

Thaddeus Winslow Cooper III was a Cooper thief that lived in England during the Victorian era (1837-1901).[1] His cane is very similar to Sly's but has a ruby attached to it. He is considered the most chivalrous of the Coopers.[2] According to his entry in the Thievius Raccoonus, he was at the peak of his career in the 1890s.[note 1]

Like most other Coopers, he left his cane and some other precious belongings in the Cooper Vault. His section of the vault was comprised of jumping on floating barrels, hook swinging and spire jumping.[2] His most recent appearance was during a train heist in which Sly Cooper used his section of the Thievius Raccoonus containing details on disguise, deception and charm to bypass security, including Inspector Carmelita Fox.[1] He is the master of disguise.

Thaddeus' section of the Thievius Raccoonus.

Sly Cooper dressed like Thaddeus in Goodbye My Sweet, Part One.

Thaddeus in a cutscene of Thieves in Time. 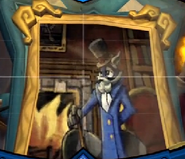 Painting of Thaddeus in his section of the Cooper Vault.

Thaddeus' section of the Cooper Vault.