The Guru of the Stone

Sly: Anybody you call "master" must be a heck of a guy.
Murray: Oh he's awesome! He'll get inside your head and freak you out six ways from Sunday!
Sly: Uh, awesome.
― About the Guru[src]

The Guru of the Stone,[1] known colloquially among the Cooper Gang as "The Guru," is an Aboriginal shaman living in the Australian outback. He was Murray's spiritual master and instructed him in the arts of the Dreamtime. After the Cooper Gang helped him clear miners out of his home, the Guru became the first individual to join the group and aid them in the Cooper Vault heist.

He was voiced by Terry Rose.

Although the Guru's home was a small hut in Yuendumu, Australia, he spent most of his time meditating inside a nearby cave.[2] He studied the mystic arts of the Dreamtime and was also the guardian of the malevolent Mask of Dark Earth, which dwelled deep underground.[3]

The Guru was visited one day by Murray, who wanted to find his "spiritual center." The Guru agreed to teach Murray in the art of the Dreamtime and sent him to locations all over the globe as part of his training.[4] He also taught him the Aboriginal Ball Form and potentially the Temporal Lock.[5]

The next location the Guru sent Murray to was Venice, Italy, where he tasked his student with remaining there until "the black water ran pure." This black water was actually the tar-polluted water around Venice caused by Octavio.[4] While Murray was completing his assignment, miners arrived in the outback and began excavating opals. They deployed a gyro-copter that honed in on the Guru's Moon Stone and captured him.[2] The miners' excavations disturbed the Mask of Dark Earth which, unguarded, escaped from the caves.[3]

Without his Walking Staff and Moon Stone, the Guru was powerless to escape from his stockade prison and could only watch as the miners tore up the landscape. While the Guru was imprisoned, Sly Cooper showed up to break him out. The Guru refused to leave his prison until his equipment was returned to him. He also requested that Bentley and Murray meet with him individually.[2]

Murray was the first to meet with the Guru. He told his teacher that he had accomplished his task back in Venice and wanted to rejoin the Cooper Gang. Murray also expressed his hopes of the Guru coming along with them. The Guru replied by explaining his current situation with the Mask of Dark Earth and the miners – that only when these two adversaries were dealt with would he join the gang.[6] Later, Bentley visited the Guru and returned his equipment to him. When Bentley asked how the Guru planned to escape from his stockade, the Guru displayed to Bentley his ability to transform and take control of others. Once he had broken out, the Guru set out to destroy the miners' machines that were tearing up the landscape.[1]

During the final phase of the Cooper Gang's operation, Moon Crash, the Guru destroyed the miners' gyro-copter. He also spotted out the Mask of Dark Earth to Murray (who was disguised as the Moon Spirit). When the gang failed to destroy the mask, it took control of Carmelita Fox; however, Sly was able to get the mask off of Carmelita and it was destroyed. The Guru and the Gang watched over Carmelita as she recovered.[7]

As Carmelita began to stir, the Cooper Gang made a hasty retreat. With the Mask of Dark Earth destroyed, the miners gone, and the Guru's home at peace once again, he followed the gang on their travels and was recognized as a new member of the team.[8]

As the Cooper Gang's mystic, the Guru aided them as a valuable ally during their operations in Holland. His missions involved assisting the gang in breaking into one of the Belgian supply trucks[9] and possessing a giant wolf within the area to thin out the Black Baron's guards.[10] In China, he assisted Sly in retrieving Bentley's computer back from General Tsao using his telekinetic abilities.[11] During their fight against Captain LeFwee in Blood Bath Bay, the Guru used his abilities to control the Crusher, effectively turning it against the pirate captain.[12]

Finally, as they began their final heist at Kaine Island to gain access to the Cooper Vault, the Guru possessed numerous sharks to destroy a magnetic buoy that the cane had clung onto.[13] After the disbandment of the Cooper Gang, he took on new students, a rock band called "The Oscars," for his Dreamtime course. However, he was subsequently annoyed by the attention they attracted and so, along with the band, fled to New York in order to escape the media, figuring "it was the last place they'd ever look".[14]

The Guru is a purple koala with brown eyes. He wears a red bandanna and brown loincloth. In his purple beard are two braids wrapped in blue strips of cloth. He has yellow face paint across his nose and under his eyes. In his hand, he carries a staff with a purple glowing moon stone tied onto it with rope.

Thanks Guru, you always know just what to say.
― Bentley, after the Guru gives him advice.[src]

The Guru was a pacifist who sought to solve problems with minimal violence; even when threatened, he would try to find a "middle way" instead. He was kind to his comrades and even showed a humorous nature at times. He was also somewhat stubborn, refusing to leave his prison stockade until after his walking staff and Moon Stone were returned to him.[2]

The Guru is an expert in the mystical art known as Dreamtime, which grants him various abilities.

The Guru's most notable ability was the power of hypnosis, as seen when he controlled enemies by mounting himself onto their backs. Another one of his techniques allowed him to morph himself into common objects in order to blend in with his surroundings and avoid detection from enemies. To use these abilities, he required the power of his Moon Stone, with which he was also able to communicate with the other team members through their varied binocucoms.[1]

Depending on where he was, Guru could become certain objects.

The Guru possessed a high degree of telekinesis, and used this technique to lift various objects and guards high above the ground.[11] The Guru also possessed a certain degree of telepathy, as observed when he bridged both Sly's and the Panda King's minds, and also when he read the Panda King's mind in order to discover the reason why he was in a complete state of peace.[15]

Although the Guru taught Murray techniques such as the Aboriginal Ball Form and the Temporal Lock, it is unknown whether or not he was able to perform them himself. 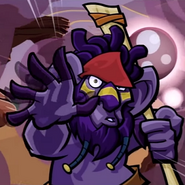 Guru in the Outback

The Guru standing by his hut

The Guru in Murray's binocucom

A painting of the Guru in the hideout 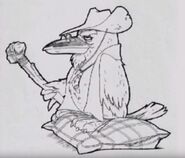 Concept art of the Guru as a Kookaburra 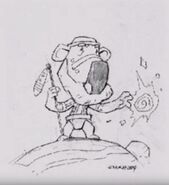 Concept art of the Guru

Concept art of the Guru as an alternative character 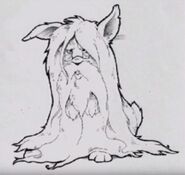 Concept art of the Guru as a long-haired rabbit

Murray under the Guru's training