Sly Cooper
Salim al-Kupar (previous owner)
The Thief Outfit is a costume available for Sly Cooper in Sly Cooper: Thieves in Time that "is rumored to be the outfit of a real genie." It formerly belonged to Salim al-Kupar, but he pawned it after losing a lot of money in a camel race. Sly had to get the outfit back so he could gain Salim's trust that the Cooper Gang are trying to help him. He had to steal three priceless gemstones and then give them to a snooty salesman that would not leave his post.

Rumored to have been crafted for Sinbad by a real genie, this ancient and mysterious outfit is as dazzling as it is powerful. Its huge scimitar can slash right through chains, and the wearer even gains the ability to slow time!
― In-game description[src]

The Thief Costume is made up of several parts. Sly dons a red bandana on his head, along with two gold earrings on his left ear. He also now has a black goatee. The shirt is white with gold lining around the collar and down the front of the shirt, as well as gold cuffs. Over the shirt is a blue vest that has a gold badge or medal and frills on the bottom. Around Sly's waist is a red scarf-like belt. He also wears blue pants and red genie shoes. On his back is a large scimitar, and in his hand is an hourglass-topped wooden staff.

The staff that replaces Sly's cane does not have a hook, causing him to lose the ability to hook and swing along with attaching to wall hooks, though he was still able to pickpocket. As with his other costumes, all ThiefNet power-ups are disabled, including the paraglider. Wearing this costume also prevents Sly from performing some of his default moves such as the Spin Attack or Stealth Slam.

The Thief Costume in Sly Cooper: Thieves in Time 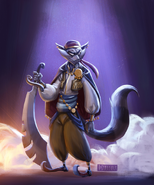 Concept art of Sly using the sword to lockpick locks instead of cutting metal chains.