Scorpion Cleaner
Dump off the truckload of scorpions.

"Big Truck" was a job for Sly Cooper and Murray in Rumble Down Under of Sly 3: Honor Among Thieves.

After the cutscene, have Sly deal with the guards and activate the drill. Control will switch to Murray.

To ride the truck, hold

to drive forward, and hold

to back up. Hitting

while moving activates the e-brake and flips the truck over, releasing a net. Cool down the tires every once in a while by driving over scorpions or going into the water.

Repeat the process for the remaining 12 red scorpions. The water has drained down, though, so squish scorpions to cool your tires.

Once you capture 20, set the scorpions loose in the mine, and it's Job Complete. 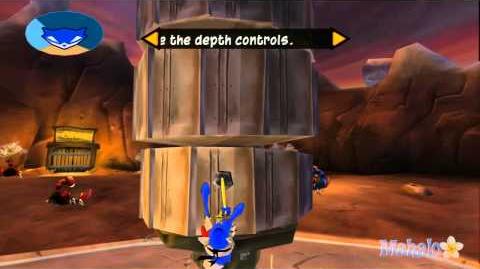