Crusher from the Depths

"Crusher from the Depths" was a job for the Panda King and Sly Cooper in "Dead Men Tell No Tales" of Sly 3: Honor Among Thieves.

Find the location of Crusher and figure out why the pirates fear it so much.

After the mission starts, you take control of the Panda King. You need to defend your ship from the Crusher, so hold

to load your fireworks launcher. If you overload the fireworks launcher, it will explode, damaging the Panda King, so make sure to time it right. As tentacles come into view, target and fire at them by releasing

. When the Crusher's head surfaces, make sure to target it. Filling up your fireworks launcher to maximum capacity will make this part go by faster. Avoid the flaming rocks that it launches at you.

The Crusher will now attempt to pull the boat under the water. If too many tentacles grab onto or roll the ship, you will fail the job. Target multiple tentacles at this part to complete this part easily and quickly. Hit the Crusher's head a few more times, all the while dodging its attacks. Soon, the Panda King will run out of fireworks, so Sly comes into play.

As the Crusher latches its tentacles onto the boat, smack them to cause the suckers to stick to the boat. Though it takes a while, the tentacles will detach if you aren't fast enough. Latch on enough tentacles to make the Crusher's head come close to the boat, then fire the cannons into its large eye. Do this a few more times, still dodging flaming rocks and the latching tentacles, to complete the mission. 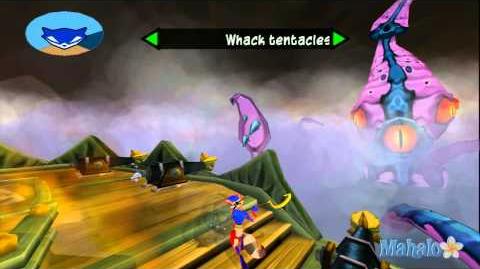