Danger in the Skies

You will start off by getting an aerial boost by the biplane launcher. After that, you will start flying around the island. Try to fly near a turret. Once you're close enough, the turret will fire two missiles. Try to dodge the missiles with

to roll. Once the sensor is revealed, shoot it to destroy the turret. Repeat this for all fourteen turrets.

until a target pops up. When the target is up, aim it on a bat. Once it starts to blink, let go of

. Now that the shields are down, shoot it with the machine gun.

When you've eliminated them all, Dr. M will come up out of the water with the Whale-Fly. The Whale-Fly has two attacks. The first attack consists of pods that release missiles. Destroy them, and try to damage Dr. M. After a certain point is reached, the Whale-Fly will emit green bars that will damage you if you touch them. Try to stay in the middle of them and damage Dr. M. After both rounds of missile launchers and green bars, the Whale-Fly should seem undamaged. Dr. M. tells you that guns are like toys to his machines, and the Whale-Fly would laugh if it had vocal chords. Sly is infuriated, and you have to paraglide over to the Whale-Fly. After a short conversation, Sly steals his cane back and heads to the Cooper Vault, completing the mission. 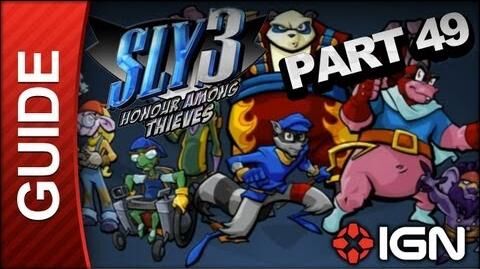