"Crusher from the Depths"

"Battle on the High Seas"
"Deep Sea Danger" was a job for Dimitri Lousteau in "Dead Men Tell No Tales" of Sly 3: Honor Among Thieves. It was the first job for Dimitri.

Collect some cannon amplifiers to improve the effect of the ship's cannons.

After a mission briefing with Bentley, the player dives underwater. There will be a small pool where you receive a diving tutorial. Afterwards, go through the rapid tunnels. The tunnel leads to the upper reef, and the shipwreck should be right in front of you. Once you've found it, there will be six golden shark-heads lying around. These are the cannon amplifiers that you need. They are indicated by a yellowish glow around them, so they shouldn't bee to hard to spot. Collect one and swim back up the pirate ship's collection basket. Once you've collected those, move on and look in the underwater ravine (or lower reef) for two small golden fish, and for the final part, you need to return to the top and kill five hammerhead sharks. After that, it's job complete. 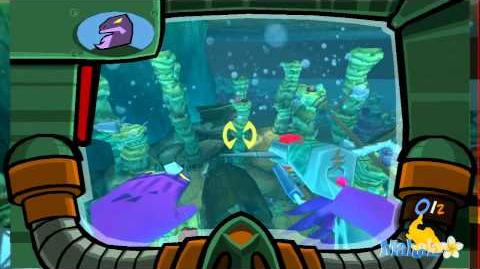