"Cooper Hangar Defense"
"Frame Team Iceland" was a job for Murray and Sly Cooper in "Flight of Fancy" of Sly 3: Honor Among Thieves.

To use the raft, steer with the

to row forward, and

to go backward. Row to the end, watching for the spiked balls. Once you make it the dock, control will switch to Sly. Make your way to the hotel ventilation system.

Once in the room, carefully sneak past the burglar traps and steal the Viking helmet. Head back to the sewer and back to Murray. Control will switch back to Murray. The valve gates changed position while Sly was gone, so you need to row through another tunnel to get back to the outside. Just avoid the upped security.

Once back on the surface, head for Team Belgium's hangar. To destroy the anchors to the plane, tuck into ball form, and rapidly press

for a charged ball attack. Attack all four tethers and plant the helmet on the destroyed plane. Once that's done, the job is complete! 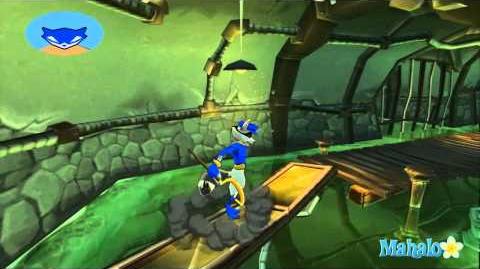