"Tearful Reunion"
"Get a Job" was a job for Bentley and Sly Cooper in A Cold Alliance of Sly 3: Honor Among Thieves.

Head inside General Tsao's palace and score Bentley and Sly jobs for the wedding.

As Bentley, enter the palace and walk up to General Tsao. After the cutscene, control will switch to Sly.

As Sly, don the photographer disguise (open the Gadget Grid with

and assign the disguise to a button) and approach the three waypoints. Say the right passwords and take the three shots. In order to take the third shot, you need to get rid of the annoying monkey guard. Wait until he walks over the spikes to the left and use the button, or switch out of the disguise and stealth slam him. After taking the third picture, go to Tsao's quarters and take three pictures of him. Show the photographs to Tsao and it's job complete.

Note: Once you have gotten the guards into their poses, taking off the photographer disguise will fail the mission. 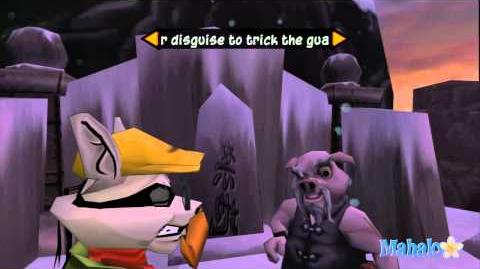